Almost every book lover I know is haunted by their ‘To Read’ pile. I have several piles all over the house (‘fessing up below). To make it look less bad. And I still buy more (I live near an Oxfam bookshop for goodness’ sake!). And I don’t read them in order, so I have unread books that have been in my possession for years! Fortunately, my husband suffers from the same affliction otherwise it could be very problematic. 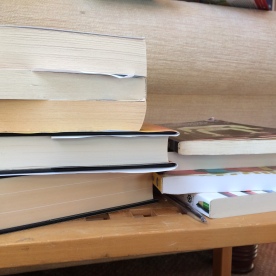 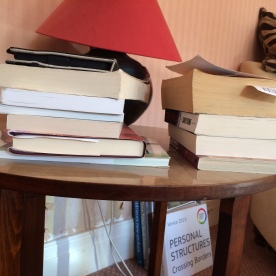 It’s very frustrating then to take books on holiday and bring them back unread. I blogged last week about the two I managed to read on my hols, and this week I’m reviewing one of the ones that has taken me a bit longer, Anthony Doerr’s All the Light We Cannot See, a fantastic book.

Anyone else read it?

This book came up for me on one of those ‘Amazon recommends’ emails. I don’t usually click through, preferring to plough my own furrow, but, confession, I liked the cover and for a moment I got the title confused with the new Michael Fassbender film that is coming out soon, The Light Between Oceans, so my attention was piqued. It just goes to show what is important in attracting potential readers!

Most of the novel is set during the Second World War. There are two main characters: Marie-Laure Le Blanc is a young French girl, fifteen when the war ends, who is blind and lives with her father, in Paris. Her father is a security guard at the Museum of Natural History with a talent for locks. He adores his daughter and makes intricate models of their neighbourhood to help her find her way around the streets. He also conceals small gifts in the tiny buildings and Marie-Laure has to solve complex mechanical puzzles to find them. When war comes they seek refuge in St Malo with Marie-Laure’s eccentric great-uncle, Etienne, who has severe agoraphobia and has not left his house for decades. They escape Paris just before the occupation and Marie-Laure’s father is charged with concealing a precious stone, one of the treasures of the museum, in order that it does not fall into the hands of the Nazis.

Werner Pfennig is a German boy, a little older than Marie-Laure, who lives with his younger sister, Jutta, in an orphanage near Essen. Their father was a miner and this would appear to be Werner’s destiny also, were it not for the fact that he soon comes to the attention of the authorities because of his brilliance at constructing and repairing radios. He gets a name for himself in the town and is sent to an elite Hitler Youth school. The link with Marie-Laure and her family is that Werner and Jutta listen secretly to musical broadcasts by Etienne, finding comfort in particular in renditions of Clair de la Lune. As soon as he is old enough, and the Nazis become increasingly desperate, using younger and younger men in their war effort, Werner is sent to the Front and his role is to find Resistance radio transmitters, using his mathematical and technical genius.

A third main character is introduced about halfway through the book, Sergeant Major von Rumpel, whose job is to pillage European collections, gathering together all the treasures and valuables he can lay his hands on, to fulfil Hitler’s dream of a grand museum in Austria. He has very specific items in mind, one of which is the stone that Marie-Laure’s father has been charged with concealing. At this point the novel becomes a cat-and-mouse tale as well.

The novel alternates between a chapter about Marie-Laure and a chapter about Werner, so the journeys of our two main protagonists are kept very much in parallel. Although the two find themselves on opposite sides of the war, in my mind they became very much connected; they have a common innocence, a common disbelief about how the events they are living through have come about, and with both there is a sense of young lives blighted and potential thwarted. The novel jumps back and forth in time (there seems to be a bit of a fashion for doing this in fiction at the moment), so we start in 1944, jump back to 1934, then to 1944 again, then 1940. I sometimes found it difficult to keep track of which year I was in, which was slightly annoying!

At over 500 pages, it’s long but the chapters are short, so you can dip in and out for short reading sessions. It’s also quite intense, but the action moves along quite quickly, there are lots of events, so it doesn’t feel like a long drawn-out novel.  It is also beautifully written. Let me give you a few of the descriptive phrases that struck a chord with me: tinned peaches (in this time of culinary austerity) are described as “wedges of wet sunlight”; when Marie-Laure is afraid, her heart is said to be “scrambling to deliver oxygenated blood”; and, when Marie-Laure is worried about the whereabouts of her father, it becomes “the question that drags its teeth through [her] mind”. Sublime!

There is powerful imagery of the senses: Marie-Laure is blind so is reliant on touch and hearing, yet despite her disability she ‘sees’ and understands things others do not. A recurring phrase in the novel is “Open our eyes and see what you can with them before they close forever”. Werner’s talent is also dependent on his hearing. The dark and light in the book are both literal and metaphorical. It’s a very beautiful read.

So, I would heartily recommend this book. It won the Pulitzer Prize for Fiction in 2015 and is a New York Times bestseller.

If you have read the book, I’d love to hear your thoughts. And if you’ve enjoyed reading this blog, I’d be delighted if you would follow me, so you can be notified of future reviews.