According to my Goodreads account, I started this book on 4 December. It was the final book I tackled on last year’s Man Booker Shortlist. I have only just finished it. It has taken me well over six weeks. I have read a couple of other books alongside it, mainly because it is currently only available in hardback and at 502 pages it does not slip readily into the handbag. It is also a book that demands to be read slowly, almost at the pace of a tree growing, so it requires something of an investment. If you are put off already, read on, because I must balance that by saying that it is a quite extraordinary book and every hour I have spent with it has been time well spent. It is not a book that rewards being read a few pages at a time, it is best approached with an hour or so in hand. 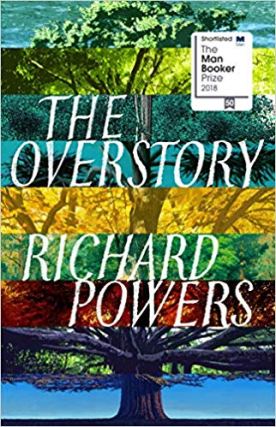 It is hard to know where to begin to describe it so I will give you the New York Times quote from inside the dustjacket:

“A monumental novel about reimagining our place in the living world.”

After reading it you cannot help but feel that the human race is bent on a suicidal mission, that we will take most of nature down with us and that our tenure as a species on this earth has been wild and reckless and over in the blink of an eye (in evolutionary terms). We’re on the way out I’m afraid. The author’s framework for exploring this is the life of trees. The number and range of trees on the planet was once phenomenal, and humans have systematically destroyed most of them, in the pursuit of so-called ‘progress’, grazing land and space for short-term cash crops, a grossly selfish and short-sighted error of judgement:

“We’re cashing in on a billion years of planetary savings bonds and blowing it on assorted bling.” (p386)

This is the essential powerful message of the book and his method of telling it is also extraordinary. The first part ‘Roots’ is made up of individual chapters about nine individuals, their background, how they came to be at whatever stage of life they are at and, for some, how their families came to be in America. For each individual, trees represent some significant event in their lives. For example, Douglas Pavlicek served in Vietnam and after his plane was hit, he parachuted out and his landing in a banyan tree saved his life.

The second part of the book ‘Trunk’ is the most substantial and details how each of the individuals lives proceed. For example, Neelay, badly paralysed after a childhood fall from a tree becomes a powerful computer games entrepreneur when he invents an extraordinary virtual world. Patricia, an introverted sight and hearing impaired young girl, whose father invested in her a love of nature, becomes an academic but her book about the secret language of trees is derided and she retreats to a reclusive life as a ranger. Many years later, others will agree with her and her thesis becomes fashionable and influential. Olivia, who almost died in part one, becomes an activist, and hooks up with Nicholas, who lost his entire family in part one after they were accidentally poisoned with gas in the family home. The two of them occupy a giant redwood tree in forest threatened by loggers for many months, though ultimately their protest proves futile (this is a metaphor). Many of the characters’ lives intersect, while others remain firmly parallel, for example Dorothy and her quadriplegic husband Ray; it is not clear until close to the end how their story is relevant.

The third part of the book ‘Crown’ is a coming together of all these separate stories, the logical conclusion to the each of the individuals’ stories and the fourth part ‘Seeds’ is about the legacy they leave behind. The end is anti-climactic in some ways, but I think that is the point; for all our ego and self-importance, the mark that humans will leave is pretty insignificant in the long-term. We will simply destroy ourselves. As the book progresses the pace also picks up, as does the switching between the individuals and their stories and the sense is created of humans accelerating towards their decline.

It is hard to do justice to the book in a short review. It is a book which merits deep reading. It is a remarkable concept and remarkable in execution and the writing is sublime, possibly the finest prose I have read in years. In some ways it has left me profoundly depressed about the direction the world is going on – it would be easy to focus on the events of recent years for examples of this but the reality is we have been crafting our own demise for decades, since the Industrial Revolution. Despite all the evidence, we continue to press on with our self-destruction, although there are a few people out there trying desperately to make their voices heard, the author being one of them – I’ve heard him a few times on the radio making the case for paying attention. The non-depressing thing about the book is the realisation that human beings are actually just a miniscule episode in the natural history of this particular planet, and it will prevail, with or without us. This is the ‘overstory’, the picture that is much bigger than us. In this respect our arrogance, particularly that of some of our world leaders, is really rather laughable. What is fascinating is the why, what drives us humans to behave the way we do, and this book sets about trying to explore that.

Though I really loved Anna Burns’ Milkman and felt it was a worthy winner of the Man Booker, I am also rather desperate for a serious realisation of the impact we are having on the world around us, and feel that greater publicity for this book could at least have contributed something to that debate.

One thing is for sure, I will never look at trees the same way again.

Highly recommended, your patience will be rewarded.

If you have read The Overstory, do you agree with my take on it?

6 thoughts on “Book review – “The Overstory” by Richard Powers”