So, my very first post, on my very new blog. Hello world!

I suspect this will land with a ‘pop’ rather than a ‘bang’, but hey-ho, that is in the nature of these things.

It is apt that my inaugural post should be about two books I read recently on the theme of family, books and family being what this blog is about. Specifically, these books are about family dynamics and how they change as children grow up and parents age. Both books deal with a widowed elderly parent and the various crises, reflections and disappointments of their adult children. I was reading them simultaneously: the first, Anne Enright’s Man Booker Prize winning The Green Road, I picked up whilst browsing in my local library. I was already halfway through this when I realised that my book club was a week earlier than I was mentally prepared for, so I had to work through that month’s book, Marina Lewycka’s A Short History of Tractors in Ukrainian, in the margins of a busy weekend. Fortunately, it’s the kind of book you can read quickly.

What is also interesting to me is that I read both these books just prior to my middle child’s recent 12th birthday (my eldest being 15). In recent years I have found that my children’s birthdays, rather like my own, have triggered emotional reflections on the ageing process (mine not theirs!). I am evolving out of that heady, busy, bustling, noisy, joyously grubby and very physical maelstrom characteristic of life with small children and on my horizon is a time when my kids will be young adults. That means I will no longer have control over what they’re putting into their bodies, I won’t be able to choose who their friends are and they will decide for themselves where they want to be in the world and how far away that is from home. And, most challenging for me, I will no longer have the power to make them happy, with a hug or a game or an ice lolly or a chat. That is only partly what these books are about (more so in Enright), but it’s what they made me think about.

How do you feel about your children growing up? Is there anything you’ve read recently that helps you to think about it?

The Green Road by Anne Enright

This is the first book by Enright that I have finished; I rarely fail to complete a book, but I gave up on both The Wig My Father Wore and The Pleasure of Eliza Lynch. There was something about the way both these books were written that simply failed to engage me. It wasn’t so much that I found the language difficult, more that I felt it lacked coherence. Both of these are much earlier works, however, and in this book her writing style has certainly matured.

The green road of this book’s title is a real road in County Clare in Ireland. In the novel it represents the powerful sense of belonging to a place that all of the characters possess, not entirely happily. Rosaleen Madigan is the central matriarchal figure, a woman who married for love to a man whom it seems was her social inferior, a fact that she at times at least, seems to regret. She appears to have spent much of her middle years, when her children were growing up, ailing in bed, and only at the end of the novel, when she is an elderly woman does ‘the green road’ take her on a journey where she is confronted with the sensual memory of her love for her late husband and what he stood for.

There are four children all of whom try to escape the oppressive semi-rural Irish society in which they grew up in the 1970s and ‘80s, which is manifested in ‘the green road’ of the title: Dan, the prodigal son, homosexual, but not openly so at home, who makes his life in New York City; Hanna, the troubled younger daughter with a bourgeois Dublin lifestyle, high-flying job and partner, a baby that she can barely relate to, and a latent drink problem; Emmet, who goes as far away as he possibly can, a humanitarian worker, whom we first meet whilst he is on a project in Mali, frustrated in his relationships with women; and finally, Constance, who stayed behind. Constance is for me, the saddest character in the novel. She takes on the main responsibility of caring for her ageing mother, and finds herself with all the trappings of a comfortable middle-class life; nice car, four kids, enough money and a husband in property.

The novel is very much about Ireland, too. It starts in 1980, where, in County Clare certainly, there is still a sense of class structure and knowing your place, of the need to marry well, of misogyny and when the Roman Catholic Church was still revered and feared in equal measure. In the New York City chapters we experience the Irish diaspora, as well as the horrors of Aids, which would have been unutterable in Ireland at that time. And in Constance, we see everything that was wrong with the Celtic Tiger, the excess and the loss of something precious.

The novel comes in a circle when the events at the end trigger Rosaleen’s reconnection with a different Ireland, the landscape of legend, and with a passion her children never saw (do our children ever see that part of their parents?). Similarly, her children reconnect with something meaningful. All except Constance, the one who stayed behind and tried to do ‘the right thing’.

I don’t want to say more than that, for fear of giving too much away. This is a powerful novel and I recommend it highly. 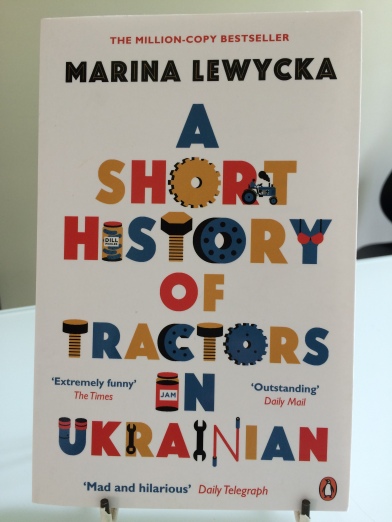 A Short History of Tractors in Ukrainian by Marina Lewycka

I got this because it was one of my book club’s reads. It was published ten years ago and I remember it being quite big at the time. I’m not sure why I did not read it back then because I read and have a copy of her other very popular novel, Two Caravans, which is similar. I wouldn’t describe it as a ‘classic’ so it is slightly surprising that it is still readily available. What is more interesting to me is to read it in the current context of hysteria about the immigration issue, and in the context of more recent events in Ukraine, with the Russian annexation of the Crimea.

The blurb and the quotes on the front of the book, place it very much in the comic genre. However, I and my fellow book club readers found there were some sinister themes in this book that made us very uncomfortable: prejudice – racial, gender, age and class – and elder abuse. Vera and Nadia are the two middle-aged daughters of Nikolai Mayevska, an 84-year old widower and a former engineer whose late wife confided on her deathbed her worries that her husband’s stupidity would get him into trouble after she was gone. Nikolai and his wife Ludmilla had escaped Ukraine after the war. Vera, the elder daughter, was a young girl at the time and has memories of those unhappy and troubled years, while Nadia was born after the family had arrived in England.

The author drip-feeds information about Vera’s early experiences and her parents’ efforts to flee oppression, which have hitherto been kept from Nadia. The historical context is interesting but I read the novel a bit too quickly to assimilate all the facts. What is clear, is that there were some terrible times, the womens’ parents had to make some very tough decisions, and, had they not left Ukraine, they could easily have died. Vera experienced the early trauma of being separated from her mother for months on end, being brought up by her grandmother, as well as spending time in a German concentration camp. This is just one of the tragic back stories of the novel that makes it hard to read it as a comic novel (‘Extremely funny’ said The Times, ‘Mad and hilarious’ The Telegraph).

The catalyst for this exploration of the past is the arrival of Valentina, a blonde and busty 36-year old, from Ukraine, with her teenage son, Stanislav. From the outset it is clear that she wants to find someone to marry in order that she and her son can remain in England, and she chooses elderly, besotted, foolish Nikolai. Valentina is both vicious and vulnerable; she is abusive towards her aged husband, humiliating him sexually and financially in the most horrific ways. This was the bit that was most difficult to stomach and which took it swiftly out of the comedy genre for me. But Valentina is also a victim, and through Nikolai’s eyes, we see how the brutality of life in Ukraine, amongst gangsters, an ineffectual government, and poverty, may perhaps explain Valentina’s behaviour. She too is a victim, at once streetwise and naive, believing the West to be a land of milk and honey, and blissfully unaware of our very British brand of poverty, deprivation and inequality. Reading this book in 2016 the exploration of the immigrant experience is also powerful.

Nadia and Vera are very different and have not been close and the events of the novel are as much about the relationship between these two women as anything else, how their differing life experiences cause their interpretation of their father and Valentina’s relationship to be at odds much of the time.

There are some comic elements to the novel but they are not easy laughs – is it okay (ie PC) to laugh at the caricature of Valentina, at the pidgin English, and the bumbling old man who escapes the difficulties of life by writing about tractors? I don’t know. Two Caravans presents some similar challenges.

It’s a quick read and you’ll get something out of it, but it’s no barrel of laughs.