My usual routines, including my reading habits, are all over the place right now! What about you? I have both my daughters at home from school and my son home from university, plus my husband working from home. Although we are fortunate to have enough space and enough technology to enable everyone to do what they need to do, there are times when we get in each other’s way. I am also a creature of habit and do not always find it easy to adjust my rhythms to fit with other people’s. So, other commitments permitting, I like sit down with a cup of tea to read at around 3pm most afternoons, just before the return home from school. But, now, that is actually the busiest time of the day in our household – everyone seems to be ‘clocking off’ and wanting interaction! First world problems, as they say. We are all well, work is plentiful; we are among the more fortunate.

At times like this, I find it’s the little things that are important, so I try to find some time every day, no matter how small, to do some reading. I have several books on the go at the moment – Ulysses (which I promised myself I’d re-read this year and which I spent a glorious couple of hours simultaneously reading and listening to on Tuesday, 16th June, Bloomsday), Hilary Mantel’s The Mirror and the Light, The Beekeeper of Aleppo, which I’m listening to on audiobook, for my book club, and which is amazing, and my Facebook Reading Challenge choice for this month – The Secret Lives of Baba Segi’s Wives. 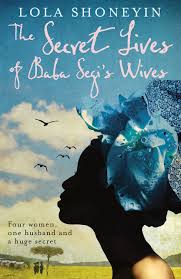 This book by Nigerian writer Lola Shoneyin, was published in 2010 and longlisted for the then Orange Prize for fiction the following year. Shoneyin writes beautifully. I have only just started it but I already love the characterisation and the humour, although a more melancholic note is now beginning to enter. It is described in the publisher’s blurb as at once funny and moving and I can definitely see that. Baba Segi is a traditional Nigerian male, still following the practice of polygamy in modern-day Nigeria. He has seven children by his first three wives, but desires more and when he meets Bolanle, a young graduate from a more enlightened family, who are against the marriage, he thinks his wish has been granted. Not all goes to plan, however.

I am enjoying the exploration of the family dynamics – a polygamous household will be outside the experience of most Western readers – and how the relationships between the four wives are beginning to evolve.

If you would like to join me in my reading challenge this month, hop on over to the Facebook Group– there is still time! It’s a fairly short book and we are only just over halfway through the month; I might even finish on time this month!

How have your reading habits changed in these last few months?

This was the April choice for my Facebook Reading Challenge. At the start of the year I choose a particular theme for each month and April’s was historical fiction. Helen Dunmore was not much on my radar until I read Birdcage Walk last year, her final novel, published posthumously (Dunmore died in 2017). I thought the book was incredible and I was desperate to read more of her work. Dunmore was also a poet and acclaimed short story writer, but her historical fiction is what she is best known for, I think, and it is outstanding. Zennor in Darkness was in fact her debut novel, published in 1993, and it won the McKitterick Prize, which is awarded to debut novels of authors over 40 (there is hope for me yet!) I was open-minded; I did not expect it to be as polished as Birdcage Walk, in which she has fully matured as a writer and truly mastered her craft, but I did think it would be interesting to observe her burgeoning talent and to be able to see how she evolved as an artist. 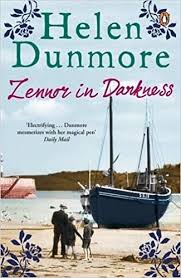 I really enjoyed Zennor in Darkness. It is a great story, two stories really, which become intertwined. Clare Coyne is the only daughter of widowed Francis Coyne, and the pair live together in the small town of Zennor in Cornwall. Clare’s mother was born there and the family moved from London when Clare was a baby in order to be near family. Clare’s father’s family had a higher social status, and Clare is clearly ‘different’ from her Cornish cousins, grandparents and aunts, with whom she has spent so much time, but Clare is largely disconnected from her paternal grandparents. Francis Coyne is an ineffectual character, a botanist who earns very little money from his publishing, who spends more time with his books than with his daughter, and who does not seem to understand her on any level. Clare has artistic ability and is a talented artist. She spends her time looking after her father, keeping house, and drawing plants for his latest book project.

Clare is very close to her cousins of her own age, particularly the girls Peggy and Hannah, and her slightly older male cousin, John. The novel is set in 1917, when Britain was in a state of trauma about its involvement in the First World War, the lives lost and the lives destroyed by battle.

Another (temporary) resident of the small Cornish community is the author DH Lawrence, who is renting a house there with his German wife Frieda (this part of the story is based on fact). The couple left London as Lawrence’s anti-war views had aroused great hostility, not helped by the fact of being married to a German. In Cornwall the couple hoped to find peace and quiet, but as the novel progresses it becomes increasingly clear that some of the locals are suspicious of Lawrence, the outsider, the anti-patriot, and rumours spread that Frieda is actually a spy; the audacious red curtains hanging in the window of their rented cottage are thought to be signals to passing German U-boats!

Clare strikes up a friendship with the Lawrences, and is excited by their bohemian lifestyle, such a contrast to her own humdrum life and community. Clare also becomes romantically and sexually involved with her beloved cousin John when he returns home briefly on leave from the trenches. Like Clare, John is a cut above, had ambitions to be a doctor when he was younger, though the war put paid to that. His ability has been recognised, however, and at the end of his leave he is to begin officer training.

The title of the novel has many meanings – the ‘Darkness’ could refer to the dark times of the war and the attendant human suffering, but also to the sometimes narrow-minded attitudes of the local community to the outsider Lawrence, to Clare and Francis even. The setting of the novel is at times idyllic; there is a sense of suspension of time and escape from war (in part why the Lawrences moved there), particularly in the wonderful scenes at the beginning of the girls paddling in the sea and the recollections of the idyllic rural childhood they enjoyed. But as the novel progresses, darkness descends ever more over the events. There is no ‘happy ending’ here (how could there be, set as it is in the First World War?) but there is a kind of peace, a reconciling and a coming of age which is partly positive.

I thoroughly enjoyed this book and it will spur me on to read more of Helen Dunmore.