A the beginning of lockdown it seemed there was no end to challenges published on social media as most of us stared into an abyss of being confined in our homes for an indeterminate period. Whether it was fitness, craft, cooking, or reading, there was a challenge for everyone. For others, just staying alive and/or sane was enough of a challenge, and for many, of course, endless unfilled days were a luxury they could only dream of; health and care workers, key workers in supermarkets and delivery drivers all found their work was busier than ever. I got sucked in too, thinking that I was suddenly going to have lots of time on my hands to do all sorts of jobs I had not got around to doing for months, as well as reading more (SO much more!), being really creative, sorting out my garden, etc, etc. The reality was somewhat different. I, and many others, had not factored in the emotional toll of this period we called lockdown; it was not like a staycation AT ALL, it was really stressful! I was relatively lucky: some people were worried about dying and others were painfully lonely, some were locked up with abusive partners, others confined in an apartment with young, bored children who needed home-schooling. I only had a working from home husband and three teenagers to contend with. But still, I found it difficult to settle to very much at all.

I have posted on here before about how valuable I found the streaming of National Theatre Live performances, the Hay Festival channel, and the BBC Glastonbury channel was great (if anyone has ever wondered whether the TV license fee is worth it I hope their question has been answered well and truly in the affirmative these last few months). I have also been watching a lot more television than ever before and it has been such a treat. I finally watched the amazingly incredible His Dark Materials in full – Dafne Keen as Lyra Belacqua was simply the stand-out performance and she’s only 15! Season two is coming soon – the trailer alone is thrilling. I also enjoyed Normal People, the much-acclaimed adaptation of Sally Rooney’s much-acclaimed novel. I loved the book and was so excited to watch the television series. I thought it was very faithful to the book, and the acting performances (again from two very young actors) were outstanding, but it did not move me as much as the book. Perhaps my expectations were too high, or the book was just too good? I have also watched a couple of the new versions of Alan Bennett’s Talking Heads. They are brilliant! There are twelve to watch altogether and every one of them will be fantastic I am sure as the casting is extremely high calibre.

Despite all this ‘extra time on my hands’ there are a few things I still have not got around to that are on my must-watch list: Noughts and Crosses, the series based on the Malorie Blackman novels, and My Brilliant Friend, the Italian adaptation of the first novel in Elena Ferrante’s Neapolitan series, which is now available on YouTube! I can’t wait to watch it, as it’s one of the best things I’ve read in the last few years. I also haven’t even started on the epic series The Luminaries yet, which has been screening on Sunday evenings on BBC1 for the last few weeks. It has finished now and its slot has been swiftly taken by A Suitable Boy, Vikram Seth’s epic novel from 1993, and still one of my all-time favourite books. Since I read Gone Girl in January I’ve also been wanting to watch the film – that’s another one on the list.

So, lockdown has not been the reading/film-watching/sewing/baking/decorating/ exercising bonanza that I thought it would be. Maybe in six months I’ll be asking myself what on earth I did with all that ‘spare’ time. Maybe I’ll just say to myself that I kept my family safe and well, I helped some people, I walked a lot, I kept my head together (ish) and I did enough.

What are your reflections on your life in lockdown?

This was the title I chose for May in my Facebook Reading Challenge, the theme of which was classic crime fiction. I’ve read a few Agatha Christie’s in the last couple of years, having never much delved into this genre for most of my reading life. I loved the escapism of Death on the Nile and Murder on the Orient Express and I wanted to see if I would enjoy just as much a murder mystery set in the more prosaic location of London. I had also seen a little of the television adaptation from 2018 starring John Malkovich (though I think I only caught a couple of episodes) and it seemed altogether more grounded in the grim reality of its criminal subject. I’d love to watch it, actually, now that I’ve read the book, but sadly it’s not available at the moment. The film and television adaptations I have watched of Agatha Christie works have been more like costume dramas with more than a hint of comedy. I think I might prefer that to the darker readings of more recent years (rather like my late grandmother who was a voracious reader and loved nothing more than losing herself for a day in “a good murder”!)

In The ABC Murders Poirot is involved in a cat and mouse game with a serial killer, someone who warns in advance where and when he will strike, taunting our Belgian hero; the murderer begins with middle-aged shopkeeper Mrs Alice Ascher in Andover, then flirty young waitress Betty Barnard in Bexhill-on-sea, and so on. In this novel Poirot is past his career peak and his approach is challenged as somewhat old-fashioned in the form of Inspector Crome, an ambitious young detective who prefers more modern methods in his investigation. The murderer, however, pits himself squarely against our ageing Belgian hero; it is, unusually for the Poirot novels (it seems to me), a psychological game between perpetrator and hunter.

I also found Christie much more philosophical here than in the other Poirot novels I have read, on the criminal mind and on human nature and society more generally, such as in the following quote from Poirot:

“Speech, so a wise old Frenchman said to me once, is an invention of man’s to prevent him from thinking. It is also an infallible means of discovering that which he wishes to hide.”

I thoroughly enjoyed this book. Like so many before me I have come to love the character of Poirot, though in my mind, I can only ever see him as David Suchet! This was the quintessential book to curl up in a chair with and lose myself for an hour or so. As such, it was the perfect antidote to the continuous grim news about Coronavirus which dominated this Spring for most of us. Every time I read a Christie novel I want to run away and just read more. That might take me years since she was so prolific! I have been exploring the official Agatha Christie website with interest and it has fantastic recommendations on screen adaptations of her work, though I might need another lockdown to get through them!

If you are an Agatha Christie fan, what are your favourite novels and screen adaptations?

Another month passes us by and I’m delighted with myself because for the first time in ages I actually managed to finish the book I’d set myself for the Reading Challenge, ON TIME!!! Wonders will never cease! Perhaps as we begin to ease our way out of the Covid-19 lockdown in the UK certain aspects of life are beginning to return to normal. Certainly, the mood in my household is a little more easeful, and I find myself with more mental and emotional space to settle into the things that I enjoy without my concentration being all over the place. What about you?

Last month, the theme of the Reading Challenge was ‘Something from Africa’ and I picked the debut novel of contemporary Nigerian writer Lola Shoneyin The Secret Lives of Baba Segi’s Wives. If you were able to read along with me, I hope you enjoyed the book – I loved it! Shoneyin, previously a published poet, released this novel in 2010 and it was longlisted for the Orange Prize for Fiction in 2011. Described as a feminist author, I thought the book was clever in the way it portrayed the patriarch Baba Segi and his polygamous household where, though he is referred to by his wives as “Lord” and “King”, he is in fact a fool deceived by the much cleverer women around him. The book begins in comedy, but its ending is much more sober and ambivalent.

I loved all the characters in the book, how wonderfully well-observed they all were, how cleverly the author tells us just enough about their backgrounds to give us a clear understanding of what motivates them and drives them to act in the way they do. In part they are caricatures, apart from Bolanle, Baba Segi’s fourth wife, the most well-developed character, whose very existence drives the plot and who exposes, completely unknowingly, a complicated web of deceit. The plot is tremendous and the way it unfolds is both entertaining and enlightening. I read the last 100 pages or so in one sitting, I couldn’t put it down.

Sadly, I cannot find a reference to anything Lola Shoneyin has published since 2010. I would have loved to read another novel by her. 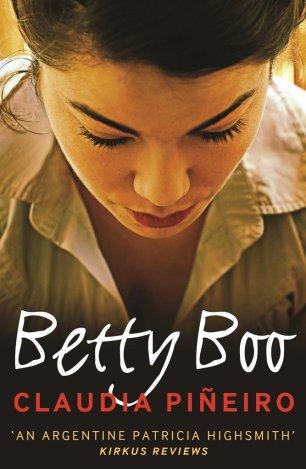 July’s theme is ‘Something from the Americas’. I always had South America in mind here and it was hard as there is so much to choose from among the great classics by Isabel Allende, Mario Vargas Llosa or Gabriel Garcia Marquez, to name but a few. However, I really want to explore something more contemporary and less of a household name outside South America. I’ve chosen a book by Argentinian crime and mystery novelist Claudia Pineiro – Betty Boo. This was first published in 2011 in the original Spanish and then in English translation in 2016. It’s available in paperback and on Kindle.

I hope you will be able to join me in reading this. I wonder if it will be anything like an Agatha Christie?!

Are you finding yourself with more or in fact less reading time at the moment?

If you have enjoyed this post I would love for you to follow blog. Let’s also connect on social media.