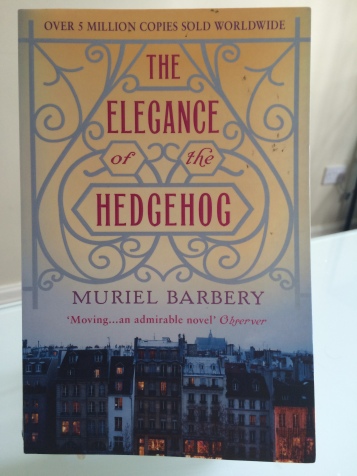 I’m finding this a very hard book to review, because it is incredibly difficult to pin down. When first published (according to the blurb), it was a sensation, was serialised on BBC Radio 4 and sold five million copies worldwide. I have to confess that it passed me by at the time, but in 2008 (it was published in France in 2006) I was knee-deep in small children and did not have much time for reading. If I’d read it then, I suspect I may not have enjoyed it as much, firstly, because, for me, it was a slow-burn and took a while to get to know the characters, and, secondly, because I feel it is best savoured in longer reading sessions (although the chapters are short); my reading habit then was ten minutes a night prior to falling asleep, and this book would not have lent itself to that.

The book is divided into five ‘parts’ and each part is separated into a number of chapters, all of which have very cryptic titles. It is set in an apartment block in an affluent part of Paris. It is written in the first person and there are two narrators: Renee, the middle-aged concierge, and Paloma, the pre-teen daughter of one of the resident families. Both are highly intelligent ‘misfits’. Renee comes from a poor provincial family and never received the education her intellect deserved. She has devoted her adult life to learning at the local library, devouring a diverse range of topics, about which she speaks with knowledge and authority. Sadly for Renee, the class constraints of French society have held her back and she has never felt able to ‘flower’ or to realise her potential. To the residents of the apartment block (most of whom we understand to be buffoons, snobs and poor little rich kids) Renee is careful to maintain the façade of the stereotypical concierge – subservient, truculent and uneducated.

Paloma is a precocious young girl whose superior intelligence means she finds the company of her family irksome as she is irritated by their social and intellectual pretensions. School is also a bore, her teachers dull and obtuse, a place where she feels she has to ‘dumb-down’. Like Renee she prefers to keep her intelligence hidden – for the sake of a quiet life, perhaps, but also I think because she has yet to meet anyone worthy of seeing that side to her.

Then, the mysterious Mr Ozu from Japan moves into the block, following the death of one of the more odious residents, and his presence sparks a fascination in both Renee and Paloma because of their mutual interest in Japanese culture. He is the catalyst that brings Paloma and Renee together, and a three-way relationship develops that alters the lives of our two main protagonists.

At this point you realise that the first third of the book is scene-setting (I’m going to go back and read this part again), so if you find it difficult to get into at first, persevere, because you will be rewarded. To begin with I wanted more ‘story’ and I felt I wasn’t getting it and could not see how one was going to be conjured out of the material put before me in the first 100 or so pages, but conjured it truly is, and in the most breathtaking way! I’ll say nothing more on characters or events, for fear of giving away even the slightest spoiler!

I do not speak French, but I am pretty sure this is a brilliant translation – it is pure poetry and that is a hard thing to achieve with translation. The translator has brought out moments of sublime humour, particularly in Renee’s observations of the block’s residents: Paloma’s student sister Colombe, who lives a very privileged life, but who prefers to dress grunge-style for effect, is described as “Her Majesty Colombe de la Riff Raff”. Or, elsewhere, observing the enforced fixed smiles of two of the women residents when they see Renee dressed up and going out “I have never seen so many teeth”. Elsewhere there are some wonderful descriptions, not least the explanation for the title on page 139.

I said this was a hard book to pin down: it does have a plot of sorts, but it is essentially about two women growing into themselves, one whose path in life is just beginning (Paloma) and the other (Renee) in middle age, jaded by a lifetime of hiding and suppressing her true self. In charting these two journeys the author sets about exposing the spiritual poverty of many of the rich marginal characters, so many people trying to be something they are not, and upending some of the clichés of French society, the absurdity of social rituals and the fracturing that occurs where there is extreme wealth and extreme poverty.

One thought on “An absolute joy of a book”