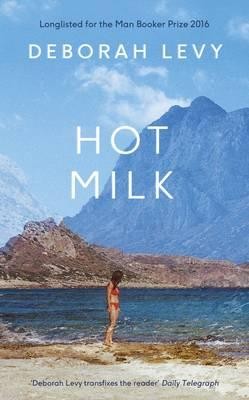 This was the first book on my ‘read the Man Booker shortlist challenge’, which I set myself a couple of weeks ago. I really enjoyed it, but it’s a book that I will probably have to mull over in my mind for a while before I can really pin down what it’s all about, because it is operating on so many levels. I think that makes it the mark of a very fine piece of literature and the writing is sublime.

So, a plot summary: Sofia is in her mid-twenties, half-Greek, half-English. She is an anthropologist, but abandoned her PhD, primarily to care for her mother, Rose, and now works in a coffee shop. Rose is a hypochondriac; she no longer walks and claims not to have feeling in her feet. Her doctors have been unable to identify the cause of her illness, though she is on a cocktail of drugs to manage her symptoms. As a last resort, Rose has remortgaged her home in a last ditch attempt to find a diagnosis, by checking herself into an unconventional clinic in Almeria, southern Spain, under the care of the charismatic Dr Gomez.

Dr Gomez begins his treatment firstly by removing Rose’s drugs, and, secondly, by conducting a series of psychological assessments with both Rose and Sofia. Gomez’s methods seem opaque and unsatisfactory to Rose – she is particularly unhappy at losing her medication – and yet despite her frustration, there is the increasing sense Gomez is peeling back the layers of Rose’s condition and that it is not the feet that are the real problem.

The book is primarily about Sofia, however, and it is the impact of the process on her that lies at the heart of the story.  When we first meet her she is numb, troublingly so for one so young. It is as if she has no purpose in life, no direction and no hope. She cares for her mother dutifully, whilst also resenting bitterly the personal toll this takes on her. Sofia’s life has been subsumed into her mother’s illness (“It was my special skill to make my day smaller so as to make her day bigger”) – Rose is described as a “career invalid” and Sofia is her employee – after all she has no other meaningful work.

Rose and Sofia are women on parallel journeys: Rose will end up with a diagnosis and Sofia will find out who she is. During their time in Almeria Sofia makes multiple discoveries about herself, explores her sexuality, examines her relationship with her mother, and travels to meet her estranged father in Greece with his (very) young wife and their new baby. There is the sense that Gomez’s treatment programme is about addressing Sofia’s needs and attitudes too; he says to her at one point “You are using your mother like a shield to protect yourself from making a life”. Levy invites us to look at the patterns of behaviour in our most important relationships and how they might be limiting rather than serving us.

The overriding theme of the book is nurturing, or lack of it. Sofia has had inadequate relationships with both her parents; her father abandoned her, and the contrast with his attitude to his new baby is a painful truth. Her mother seemed to lack some essential maternal quality, perhaps consumed by her own bitterness and grief at being left a single parent. This is the core theme of the book, but Levy interweaves others in too, with breathtaking skill – the breakdown of the European economy, which affected Greece and Spain particularly harshly, climate change and the desertification of parts of Spain, corruption and deceit in the medical industry and the impact of globalisation and migration on the European continent. The small, domestic and personal events of the book, seem to be metaphors for bigger political issues.

If you like a page-turner with a great story this is not the book for you, but if you want to read a very clever book where the language is rich and which explores the major preoccupations of our age, you will find this a stimulating and powerful read.

Have you read it yet? What do you think?

3 thoughts on “A book about caring, love and self-love; abandonment and family chains”