I am turning rather belatedly to October’s reading challenge book; I’ve had a few heavy reading weeks trying to work my way through the Man Booker shortlist. The winner was announced last week, and although I fell a little short of my target, managing only five out of the six, I feel I need a little break before tackling the monster that is Paul Auster’s 4321!  There is still a week to go before the end of October so completing this month’s challenge is still achievable. I’ll be posting my review of September’s reading challenge book, Big Magic by Elizabeth Gilbert, later in the week.

Continuing the theme of life-changing (it’s still Autumn and I’m still motivated!), my task this month is to read a biography or autobiography of someone I admire. Walk into any bookshop and there are dozens of course. They are particularly prevalent at this time of year as publishers turn their attention to Christmas sales. I tend to eschew those celebrity biographies which are so clearly ghost-written and which strike me as a cynical attempt to capitalise on someone’s popularity. But there are many other worthy books and authors out there. 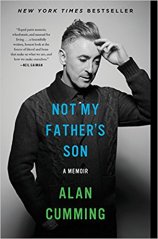 There are a couple of titles that have been on my reading list for a while. The first is Scottish actor and comedian Alan Cumming’s Not My Father’s Son, which was published in 2014. It is linked to his appearance in BBC TV show Who Do You Think You Are? in 2010 in which the result of his research caused him to reflect on his family, his upbringing and, in particular, his relationship with an abusive father. It has received glowing reviews and has also won prizes. The theme of secrets and family research is close to the book I am writing myself so it could be helpful. Or it may just make me feel like givng up now!!!

Option two is the second volume of Anjelica Huston’s authobiography Watch Me, published in 2015. I read the first volume A Story Lately Told, a couple of years ago and loved it. The first book gives an account of her childhood growing up in Ireland, and her relationship with her enigmatic father, the towering figure of John Huston. It moves on to London, her early adulthood and her first experiences in modelling and acting. Watch Me picks up when Huston is 22 years old and recounts her Hollywood years.

Finally, I saw in the bookshop recently that Claire Tomalin has written A Life of My Own, where, for a change, she is writing about herself. I admire Claire Tomalin hugely; she has written some of the finest biographies produced in recent years, covering subjects such as Jane Austen, Samuel Pepys and Mary Wollstonecraft. She has led the most astonishing life: an unhappy childhood, four children, the death of her husband, the loss of a child, and the eternal struggle between motherhood and work. I think I would find this book truly inspiring.

How similar are these three covers!?

So, which is it to be? Grateful for views

If you have enjoyed this post, I would love for you to follow my blog by clicking on the button below (or to the right, depending on your device). Let’s connect on social media too.