I dip into self-help books from time to time and have a reviewed a few on here, from Marie Kondo’s The Life Changing Magic of Tidying, which aims to improve our relationship with the things in our home, to Big Magic: Creative Living beyond Fear by Elizabeth Gilbert, which helped me to change my mindset about my right to be creative and to think of myself in that way. Both very powerful. Over the last few weeks I have been listening to Matt Haig’s Notes on a Nervous Planet (audiobooks seems to take me much longer to get through), which I have found immensely enjoyable. I’d even go so far as to say it was inspirational. I also picked up Jordan Peterson’s much-hyped 12 Rules for Life: An antidote to chaos although I’m afraid I found it quite turgid and didn’t get very far before I had to take it back to the library for the next person on the reserve list. 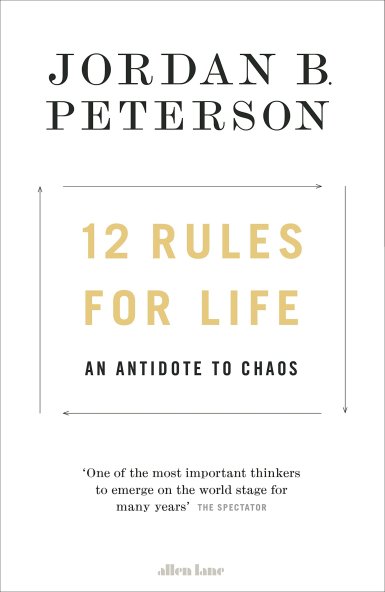 So, I originally planned for this post to be a compare and contrast between the two, but it’s going to focus more on the Haig, which, from what I read, was better anyway. Matt Haig has suffered with depression and anxiety for much of his life and it sounds as if this has at times been debilitating. Mental illness is a huge topic of conversation at the moment, rightly so, and it is very much a spectrum from occasionally feeling down or going through periods of stress and anxiety, to full-blown depression that afflicts people for years, to suicide. Matt Haig does not use this book directly to examine or discuss his own battles with depression, it’s not a memoir, but he does refer to it throughout as a way of illustrating his points.

Matt Haig’s book is more about how modern life is placing almost unbearable pressures on human beings today. He is particularly concerned about young people, and the impact of social media on their mental health. Social media forces us all into unrealistic comparisons where we will inevitably fall short. And the fact that we are constantly connected, constantly reachable and how it is so difficult to ‘switch off’ (both literally and figuratively) makes so many of us vulnerable. It is ironic that at a time when we have more ‘friends’ and followers than ever before, we seem to be more lonely than ever. This topic has been in the news again this week as new research undertaken by the BBC is revealing the extent of loneliness felt amongst young people in particular.

Notes On A Nervous Planet is, in my view, required reading, especially for young people. There are lots of people on my Christmas list who will be getting copies. I listened to it on audiobook and found Matt’s lovely, warm voice, made it particularly compelling. I will  now buy the book, however, it’s one I’d definitely like to read again.

By contrast, the little bit I read of Jordan Peterson’s left me rather cold. I think with self-help books, there are just the ones you like and the ones you don’t, and I’m afraid 12 Rules for Life probably falls into the latter category. His rules include “Treat yourself like someone you are responsible for helping”, “Assume that the person you are listening to might know something that you don’t” and “Do not bother children when they are skateboarding”. I’m sure there is some real wisdom in some of these more cryptic headlines, but there are a lot of words to plough through before you get to it and, sadly, it did not resonate with me. I fell asleep several evenings, just reading the (very long) Foreword! I’ll give it another go, when my turn comes around for the reservation, but I’ll not be rushing out to buy it. As a general rule, I don’t do very well with ‘Rules’ and prescriptions, particularly for something as chaotic as life.

If you have read either of these books, I’d be interested to know what you think.

If you have enjoyed this post, I would love for you to follow my blog, and let’s connect on social media.

2 thoughts on “New rules for life?”