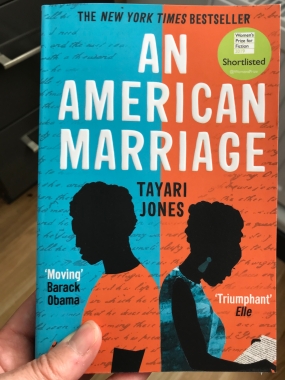 This book has been on my to-read list for some time now, ever since it caught my eye over a year ago when it was published. I recommended it as a hot new read for Spring last year, in fact! Following in my footsteps (he must have read my blog post!) Barack Obama recommended it as one of his Summer reads last year and he is quoted on the cover as saying this is “A moving portrayal of the effects of a wrongful conviction on a young African-American couple.” Notably, it also won the Women’s Prize for Fiction in June.

Let me get my cards on the table straight away – I loved this book, and it completely lived up to the hype it has had. It is such an interesting topic for a novel and yet one in which very little actually ‘happens’. It is a tender account of a relationship and the effect that one single event has upon them. It does not once get sentimental, does not set out actively to campaign about the injustice of the one event, and does not take sides. It just lays everything bare for the reader to draw their own conclusions. It will break your heart and fill you with hope at the same time.

Roy and Celestial are a young African-American couple, living in Atlanta, Georgia and their lives are on the up. They come from rather different backgrounds: Celestial is the daughter of a teacher and an academic, and is hoping to forge a career as an artist. Roy is the only son of Olive and Big Roy (who is not his biological father), decidedly more blue-collar but with strong values, pride, and deep Christian faith. They met through a mutual friend, Andre, who has lived next door to Celestial’s parents since they were children. Roy and Celestial are very much in love, but it is still early days in their marriage and they have their ups and downs.

They visit Roy’s parents in Louisiana one weekend and decide to stay in a motel; Olive has a slight suspicion about her daughter-in-law’s commitment to her son and it is more comfortable for both women if the couple do not stay in the family home. Roy and Celestial have an argument and Roy storms out of their motel room. He meets with a white woman whilst fetching ice and the two get talking. He tells her about the argument with his wife. Later that night, the police storm Roy and Celestial’s room whilst they are sleeping and arrest Roy on suspicion of rape of the woman he had chatted with earlier in the evening. At the trial, the woman testifies with certainty against Roy and it is quite apparent that Roy has little chance of escaping a guilty verdict, even though his innocence is clear to all who know him. Roy is sentenced to twelve years in prison.

The early chapters set the scene, switching between first person accounts by Roy and Celestial of their backgrounds, how they met and their recollections of the fateful night. The following chapters are an exchange of letters between the couple whilst Roy is in jail. Although Celestial visits him every month from Atlanta, the letters are an important way for them to keep their love alive. Just a couple of years into Roy’s sentence, however (and only 80 pages into the book), Celestial tells Roy that she can no longer go on being his wife, that they have spent longer apart than they were together, and that the situation is intolerable for her. We learn that Celestial was pregnant at the time of Roy’s trial but that they decided she should have an abortion as neither wanted their child to grow up with its father in prison. It is a metaphor for the doomed future of their marriage. Their correspondence ceases, and the remaining letters in this section are between Roy and his lawyer, Robert Banks, a family friend of Celestial’s parents, both about Roy’s appeal, which seems futile at this stage, and the status of his marriage.

This might seem the like the end of the thing. What we know about the couple at this stage is that Celestial is a strong-willed, independent woman who knows her own mind, and that Roy is proud, stubborn and conservative. The situation seems hopeless.

Roy spends five years in jail altogether, during which time he learns things about the status of African-Americans in the penal system he had no concept of before. He also, by chance, meets and shares a cell with his biological father, Walter. Also, Roy’s mother, Olive dies of lung cancer, never to see her son walk free. Eventually, Roy’s appeal succeeds and he is released, but he is by now broken, alone, his career in ruins. The remainder of the book is about Roy’s reunion with his old life, his hometown, Big Roy, and most importantly, with Celestial. Can their relationship be salvaged?

I don’t want to give any spoilers here, but I would just suggest that if you are looking for a romantic ending this book, thankfully, chooses not go (entirely!) down that route. It is a fine and up-close examination of the real human impact of judicial complacency, institutional racism, social prejudice and how some sectors of American society just get fewer life chances. It is also about a clash of values, between the more conservative older generation and the younger, educated, more metropolitan groups who assume there is equality.

This book is fascinating, beautiful, gripping and challenging and I recommend it highly.

If you have already read this book I would love to know your thoughts.

Follow my blog if you have enjoyed this review, and get regular updates on my posts.

2 thoughts on “Book review – “An American Marriage” by Tayari Jones”