I am not a big reader of crime fiction, but I read two over the Christmas holidays, as I feel this has been something of a gap in my education. I read Murder on the Orient Express by Agatha Christie, first published in 1934, and The Girl in the Green Dress by Cath Staincliffe who gave an excellent talk at the Northern Lights Writers Conference which I attended last year. Separated in terms of their publication by over 80 years the two titles are so different they could hardly be said to be part of the same genre but I don’t know enough about crime fiction to understand the path that links the two. I enjoyed both, but for very different reasons. I’ll start by reviewing the older of the two books. 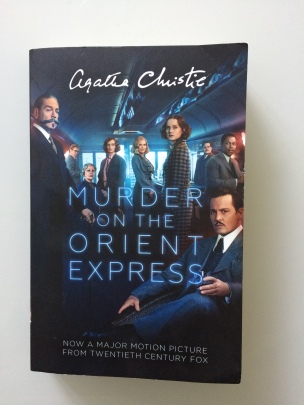 To my shame, I have not read anything by Agatha Christie before, although I have stayed at the Old Swan Hotel in Harrogate, to which Agatha famously disappeared for nearly two weeks in 1926 after a row with her husband! She is quite extraordinary when you look at the stats: said to be the best-selling author of all time, her books have sold around two billion copies (yes two billion!) worldwide, second only to Shakespeare and the Bible. She wrote 72 novels, 14 short story collections, and one play, The Mousetrap, the longest-running in the world. Miss Marple and Hercule Poirot are perhaps two of the best-known literary characters of all time, and her work has been adapted for film and television countless times. She is truly a literary giant.

Murder on the Orient Express was released as a film once again last year, directed by and starring Kenneth Branagh, and a clutch of other huge names including Johnny Depp, Judi Dench and Penelope Cruz, although it has not been well-received critically. The release of the film prompted my book club to give this title a go. We subsequently watched the 1974 film adaptation starring Albert Finney as Poirot, and an equally stellar cast including Lauren Bacall, Ingrid Bergman and Sean Connery. The film was very close to the book and we thoroughly enjoyed it. It was true escapism.

The book, also, was true escapism, though I’m glad I read it before watching the film. The structure is linear and to us would seem quite old-fashioned, but it’s a joy. It is split into three distinct parts: the facts, which sets the scene on the train, and gives us the background to the tragic Armstrong child abduction and killing case in America five years earlier. In part two Poirot hears evidence from each of the characters on the train, one of whom MUST have committed the crime, and the final part is Poirot’s analysis and conclusion, a set-piece beautifully played out in the film.

The plot is genius (I don’t want to reveal any spoilers, though I think most people who know anything about the book will know the ending – this will not detract from your enjoyment), but the way that Poirot makes his intellectual leaps is at times, totally contrived. For example, I am still not clear how he could have made the connection with the Armstrong case on such an insignificant piece of evidence. This matters not a jot, however, because it is Poirot’s cross-examinations, his exposition of ‘the facts’ and his closing revelatory monologue, which provide the real pleasure for the reader. The writing is also joyous, laced with irony, brilliant characterisation and the evocation of place….sublime! On this latter point this was the real escapism for me. I have always fantasised about travelling on the Orient Express in the golden age of steam (as long as I can travel fist class!) and this book took me right there. The opening scene of the book is set in Aleppo, which was rather poignant.

I’ll definitely be reading more Agatha Christie. This was quite a quick read, in just a couple of sittings, because it flows so beautifully and once you start it is hard to put down. Highly recommended.

If you are a fan of Christie, which of her books would you recommend I read next?

4 thoughts on “Book review: “Murder on the Orient Express” by Agatha Christie”