Holland is a fascinating country. My family and I have been going there for years, usually spending a week or so there in the Spring. Whenever I tell people that I am off to the Netherlands they utter an interested “Oh!” but I am sure that what they are really thinking is “Why?”!

We spend our Spring break in the south of the province of Zeeland, in an area that borders Belgium and which was until very recently separated from the rest of the country by the mighty Schelde river.  The opening of a 6km vehicle tunnel in 2003 beneath the Schelde at the town of Terneuzen, brought huge economic benefits to the area. On a map, Zeeland looks like a collection of islands jutting out into the North Sea, which appear to be joined to the rest of the country by the most tenuous of links. In truth, this part of the Netherlands does indeed have a tenuous grip on the land, much of it having been reclaimed from the water by sheer force of will and human ingenuity. These tracts of land are known as polders and maintaining the dikes and the drainage systems, the sea defences and the canals, is a national preoccupation.

From time to time, the sea reasserts itself (and we will no doubt see more of this across the world as low-lying lands will be the first to be hit by climate change and rising sea levels). The last major incident was in January 1953, when a storm surge in the North Sea led to the deaths of 2,551 people, including 1,836 in the Netherlands, and 326 in eastern England and Scotland. A total of 9% of Dutch farmland was under water. (See the images below of exhibits from the wonderful Watersnoodsmuseum in Ouwekerk.) 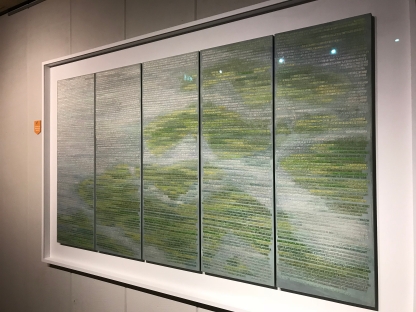 This tapestry map of Zeeland lists the names of those who died in the 1953 flood.

An exhibit with a quote from a survivor who lost everything.

I have only known about the 1953 flood since 2002, when we first started going to this part of the Netherlands, and every year I have learned more and am increasingly fascinated not only by the history of this and similar events, but also by the relationship the country has with the sea and mor widely with nature. Much of the landscape of Zeeland is man-made, many of the beaches where we have spent some glorious sunny days have been created, but I find there is a greater harmony between human enterprise and nature and an immense respect for the natural world that I have seen in few other places.

A windmill in Vlissingen 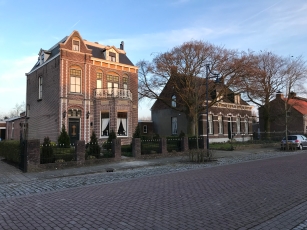 Beautiful traditional houses in the village of Hoofdplaat where we stay

Our brand-new beach in Hoofdplaat! 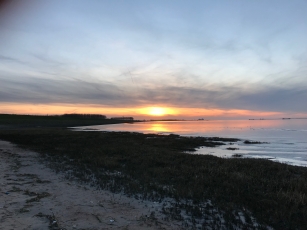 Sunset on the Schelde

Middelburg – possibly my favourite place in the world

From where we stay in the village of Hoofdplaat, in the area known as West-Zeeuws Vlanderen (nearest town is Breskens), we are within cycling distance of many pretty Dutch towns. We are also driving distance from the Belgian towns of  Bruges, Ghent, Antwerp, even Brussels. Amsterdam and Rotterdam are even do-able on a day trip.

Our annual trip to the Netherlands is one of the most relaxing and energising weeks of my year. The biggest problem is returning to gridlocked England and making the snail’s-pace journey back up to the north via the M25 and M6. As for the potholes…! Something you seldom see on Dutch roads. I recommend Zeeland for a relaxing break…just don’t tell anybody. Please.

Which places do you find most relaxing? What quality is it that creates that feeling for you?

2 thoughts on “Relaxing in The Netherlands”