I last read this book when I was doing my English degree at University. At that time, the classics were my ‘thing’, indeed I’d spent my teenage years devouring the classics and, such was my love of them, it’s mostly why I went on to study English. By the time I graduated, I was so full of books that I shunned reading anything for quite a long time. When I got back into the habit, I turned my attention more to contemporary fiction as I realised there was a huge gap in my knowledge. One of the satisfying things about favouring the classics is that they are a largely finite resource; in a few years of effort you could basically read most of them! With contemporary fiction, on the other hand, you never get caught up. So, almost all my reading in recent years has been a desperate endeavour to keep up with all the amazing books published today, and as a result I have not turned back to my beloved classics very much. So, April’s reading challenge was to re-read a classic. 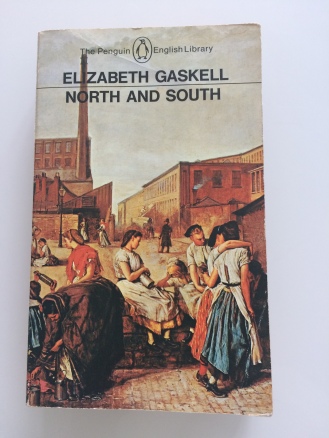 I’ve been wanting to read this novel again ever since I moved to Manchester 5 years ago and even more so after visiting Elizabeth Gaskell’s house in Plymouth Grove last year. (If you haven’t been and you’re an admirer of the Victorian novel, you really must pay a visit). I have to confess I was a little intimidated to be picking up the book – my edition is innocuous-looking enough, but, oh my goodness, paper was thinner back then and the type face is miniscule! 530 pages of closely-written text. BUT, what a joy!!!  It took me a few chapters to get back into the style, and the Victorian atmosphere, but once I did, I got totally lost, and, truly, I re-entered the world I first discovered as a young girl. I can’t remember when I last got lost in a long book, became totally absorbed by the sense of place, or was able to step into the shoes of the characters and feel their pain, their happiness, their grief their longings. Hanya Yanagihara’s A Little Life, which I read last year, has probably been the closest I have come in recent years.

In North and South, our central character, Margaret Hale, finds herself on an emotional and physical journey. When we first meet her she is living with her wealthy aunt and spoiled young cousin Edith in London; she was sent to them as a child to improve her chances in society. Margaret’s parents live humbly in rural Hampshire where her father is a country curate. Margaret has a brother, Frederick, who lives as a fugitive abroad; he is wanted in England, accused of leading a mutiny whilst serving in the navy.

When Margaret’s cousin marries, she returns to her parents only to find that her father intends to resign his post due to his religious doubt. He decides to move the family north to the city of Milton in Darkshire (for which read Manchester). There he plans to make a living from tutoring and they will rent a house from an old Oxford acquaintance of Mr Hale’s. The move comes as devastating news to Margaret and her mother, for whom the move is the last straw in her social degradation.

When the family first moves to Milton the contrast between their old and new lives is stark – their physical surroundings are completely different, the people they meet are different, and the activities that absorb their time are different. As the months pass, Margaret accepts her new life and as she is forced to confront her prejudices, so it exposes the vacuous existence she enjoyed in London. Gaskell sets about using her characters, their conversations and their confrontations to reveal certain ‘truths’ and challenge certain preconceptions held by many of the protagonists, whether it is Mrs Hale’s bias towards the south, the gentry and all the things with which she is familiar and about which she is nostalgic, or factory owner Mr Thornton’s intolerance of his workers’ strike. All the characters in this novel are in some way flawed by their prejudice (even the lowly workers at the factory despise the Irish labourers brought in to do their work when they strike). To that extent, the novel still has great relevance today, over 150 years later, as the north-south divide in England continues to have social, political and economic consequences.

Some of the characters in the book are two-dimensional, for example, the lowly Bessy Higgins, with whom Margaret develops a rather implausible friendship. It has to be remembered that these characters are merely devices through which the author is seeking simply to illustrate a point, although Gaskell’s readers at the time probably thought this was actually how poor people lived and talked. Margaret, on the other hand, is, for me, a well-rounded, credible and fully-developed character. She goes through a transformation in this novel which is both sincere and believable.

The ending of the book is entirely predictable, of course, but this is fine because the joy of this book is in the journey. Although some may find the language a barrier, for me it was sublime. Again, it took me a little while to get back into it and it made reading a little slow at first, but it was beautiful and oh so clever!

I thoroughly enjoyed re-reading North and South and I would definitely recommend picking up a classic from time to time.

Have you re-read any old favourites recently?

If you have enjoyed this post, you can follow my blog by clicking on the subscribe button below or to the right, depending on your device.

2 thoughts on “‘North and South’ by Elizabeth Gaskell”