A few weeks ago I blogged about the 2019 Oscars and identified If Beale Street Could Talk as one of the few literary connections amongst this year’s crop of nominees. It was in fact nominated in the Best Adapted Screenplay category but lost out to Spike Lee’s BlackKklansman on the night. The book is widely considered to be a classic of 20th century African-American writing.

It is a love story and concerns the relationship between 19 year-old Tish and her 22 year-old lover Fonny, whose baby she is expecting. The couple grew up in Harlem, but Fonny has ambitions of becoming a sculptor and the couple plan to move to Greenwich Village to be among other artists. The story of their love is told mainly through flashbacks, however, as, when the novel opens, Fonny is in jail awaiting trial for rape, having been accused and then identified in a line-up by the Peurto Rican victim. 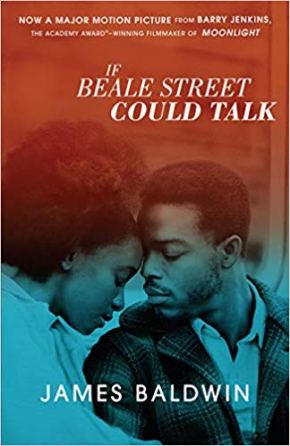 The time span of the novel is the duration of Tish’s pregnancy, during which time the couple’s two families set about trying to free Fonny, liaising with his lawyer and pulling together all the money they can to pay Fonny’s legal costs. The lion’s share of this task falls to Tish’s family, who see it as their duty to support their daughter and the father of their grandchild. Fonny’s family, on the other hand is divided; his mother and sisters are deeply confused, ambivalent and disturbed by events effectively disown him. Fonny’s father does engage, supported by Tish’s father, but it is clear he is not really strong enough to cope with the pressure. It falls to Tish’s family to take charge and her mother, Sharon even goes to Peurto Rico, to where the raped woman has fled, to appeal to her to change her testimony, the suspicion being that Fonny was simply served up to her by corrupt police officers. As Tish’s pregnancy progresses, so we follow the legal machinations, the financial pressures faced by all concerned, the effect of prison on Fonny, the artistic soul tortured by his incarceration, and the toll that events take on both families.

It is a tragic story in many ways – no spoiler intended, but events don’t really resolve in the course of the novel – but has also been described as ultimately uplifting because it shows the power of love, not just between a man and a woman, but also within the community and within the family (notwithstanding the dysfunctional nature of Fonny’s family, although the inference here is that his mother’s religious fervour lies at the root of this).  I have not seen the film so I’m not sure how it handles the open nature of the ending.

The other main theme of the novel is, of course, the black experience, and Baldwin was a key figure in mid-20th century civil rights activism in New York. He counted Nina Simone, Maya Angelou, Marlon Brando, Josephine Baker, Allen Ginsberg and Miles Davis among his many high-profile friends. It is clear that Fonny has simply been set-up to take the blame for the rape – the woman identified her attacker only as black, and in the line-up that was assembled, Fonny was the only black man present. The cops are clearly out to get him, and any other black man. The judicial system, the penal system and the social and financial system are all stacked against Fonny, against them all, a reflection of how Baldwin saw society at the time.

Although I enjoyed the book, I didn’t find it a particularly easy read. The writing felt a little spiky, uncontrolled (the type that a determined editor might address!), but on the other hand it is spontaneous and vernacular, heart-felt and real. I found the timings difficult to follow at times and the supporting characters not as well-developed as I would have liked. It helps, however, when you understand more about Baldwin and his life. Firstly, he was an essayist, poet, playwright and activist as much as he was a novelist, if not more so, and whilst I do not know his other work, I can see that way of thinking in this novel. I think there are also significant influences from Baldwin’s personal life experience which feature strongly – his relationship with his father (actually his step-father), his sexuality, his struggle to express his art in his youth, growing up as he did in the tough neighbourhood of Harlem, and his religious ambivalence.

This is an intriguing and important book, even though it wasn’t always the easiest read. The love story is powerful and moving and it has certainly made me keen to see the film and to read more of Baldwin’s work, particularly his essays and his semi-autobiographical novel Go Tell It on the Mountain.

Have you read the book or seen the film? What did you think?