I was lucky enough to be able to attend the Hay Festival again this year, having made my first visit ever in 2018. Last year I went down just for the day, and loved it, so I decided to make a weekend of it this year. It felt busier this time, although perhaps that was just my imagination. Last year, I packed four events into my day and felt like I didn’t have enough time to just wander around soaking up the atmosphere, so this year I booked five events for the two days and built in some time for a stroll into the town. The festival site is about a mile outside of Hay-on-Wye itself, or the ‘town of books’ as it calls itself. It really is a beautiful little place. I must go down sometime, outside of the festival period.

There was a decidedly political, Brexit-y feel to events this year, perhaps that is because of the looming Tory party leadership contest and the European elections last week. Also, there is a sense that the world of arts and culture is beginning to assert its feeling about the Brexit issue more vociferously as the UK’s departure draws nearer. I saw Keir Starmer on Saturday and found him extremely impressive (surely a future leader of the Labour Party?). He was thoughtful and candid, whilst also remaining tactful about current political events. He was gracious about Theresa May and less so about many of her colleagues. He was being interviewed by Philippe Sands, author of East West Street, and it was a treat to see him too. 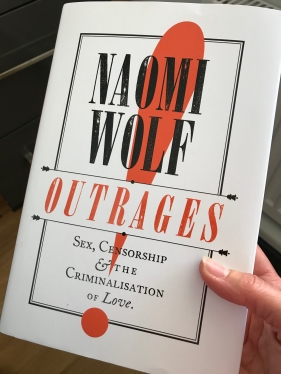 I also saw Naomi Wolf, a woman whose work I have admired for years. She was talking about her latest book, Outrages: Sex, Censorship and the Criminalisation of Love in which she traces the evolution of attitudes to sex, particularly homosexual activity, from the mid-19th century on, through the writings of John Addington Symonds. There has been a lot of controversy in the press about an error in her book (which she has acknowledged and plans to correct in the next edition), which in my view, has been somewhat overblown; I truly doubt whether a male author would have experienced the same opprobrium. Naomi Wolf was warm and articulate, and gracious about the cultural and political turmoil in the UK, reflecting also on similar events in the US too. I was glad to have heard her speak. 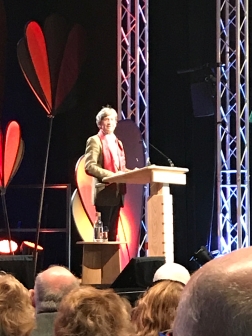 On Sunday, I went to a panel discussion led by Ed Vaizey MP, talking about branding with a number of business-people. It was interesting, and Ed Vaizey is very witty, but, to be honest, didn’t feel very “Hay”. I also saw Melvyn Bragg speak about his new novel Love Without End: A Story of Heloise and Abelard. I enjoy listening to his BBC Radio 4 show In Our Time and am always impressed by his ability to cut through to the core of so many topics. Can you believe this is his 22nd novel!!! He has also written seventeen non-fiction books. Surely, he is approaching national treasure status!

The highlight of the weekend for me, however, was seeing Anna Burns talking with Gaby Wood about her Man Booker prize-winning novel Milkman. Burns was characteristically humble and quirky, utterly authentic and it was joyous hearing her read several passages from the book. She is brilliant. I loved the book and hearing her speak made me want to go and read it all over again!

I struggled to tear myself away from the Festival; I ‘bumped into’ Maxine Peake on Sunday morning (who had performed a reading of Shelley’s The Masque of Anarchy about Peterloo on the Saturday evening). I had not booked to see her performance as I’ve seen her do it in Manchester, but am a huge fan of hers so felt slightly star struck. I also strolled past BBC journalist Kamal Ahmed, who was talking about his newly-published memoir, Michael Rosen and new poet laureate Simon Armitage. Yes, the Hay Festival is a great place to just hang out!

Have you ever been to the Hay Festival? What are your fondest memories?

If you have enjoyed this post, I would love for you subscribe to my blog for regular updates.

One thought on “Postcard from the Hay Festival”