This was the fifth book in my Man Booker shortlist reading marathon and I had not finished it by the time the winner was announced last week (George Saunders won with Lincoln in the Bardo you may recall). I was almost halfway through though, and felt quite strongly that it would not be the winner. It’s a debut novel (one of three on the shortlist, among them Saunders who has mostly published short and non-fiction previously), the author being best known for her short stories. To be honest, it did not move me, even though the subject matter is challenging and parts of the book shocking, even harrowing. 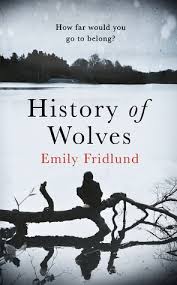 It’s a tough one to review without giving too much away, and the comments on the jacket don’t say very much about the story either, only that it is “exquisite”, “compelling” and “forcefully moving”. The central character is Linda (also Madeline or Mattie to her parents), who is an only child living with her parents in small town Minnesota. To say they live in a rural environment is an under-statement; they live in a cabin in the woods, which they seem to have built themselves, with their dogs. It seems they were formerly part of a small commune, but the other residents have gradually moved away as the cooperative spirit broke down. Linda’s parents are rather remote and she is allowed to roam the area freely, to canoe on the lake as and when she pleases, and to walk many miles in all weathers.

The primary plot of the novel is the relationship that Linda develops with a family that moves in across the lake. Somewhat disillusioned and disappointed with her own existence, Linda befriends the young woman, Patra, and her young son, Paul, aged four, and becomes his babysitter, or his ‘governess’ as Patra decides to call her. Patra’s husband, Leo is initially not present. He is an academic, working on some significant science project and has settled his family in this rural setting to enable them to have a better quality of life. Linda becomes very close to Patra and Paul, insinuating herself ever more closely into their lives, a fact which her parents do not seem to mind.

A parallel plotline is that of Linda’s school life. Linda is the victim of low-level bullying at school; the other kids see her as different to them and tease her because they know that her parents were part of a commune. The title of the story refers to a project Linda did for a regional History Odyssey. She somewhat misinterpreted the remit of the task, and therefore had no chance of winning, but her project on the history of wolves was given a special recognition. The teacher who invited her to participate in the competition, Mr Grierson, a recent blow-in from California, is subsequently implicated in a sex scandal with one of Linda’s classmates.

The first half of the book is slow. The writing is beautiful and skilful, but I had trouble seeing where it was all going and how the very disparate plotlines would at any point intersect. About halfway through Leo returns and the pace alters somewhat. His return changes the dynamic of the Linda, Patra, Paul set-up and it becomes clear that his presence is about to impact on events. Which it does! I can say no more without giving away too much of the plot, but I will just say that he is much older than his wife and that he is a committed Christian Scientist who has converted Patra, his former student.

There were a couple of things I really liked about the book. Firstly, the sense of place, the remote atmosphere of rural Minnesota and the character of the local population, their interests and priorities, are beautifully drawn. Secondly, I think the concept is a good one; the exploration of not just Christian Science as religion, cult or social grouping, but of all forms of group identity that people create for themselves in order to feel a communal belonging, is fascinating. On the whole, however, the book did not deliver for me and the group identity theme is not as fully explored as I would have liked. Later on in the novel we meet Linda when she is an adult, living in the city and reflecting back on the events of her teenage years. The novel jumps back and forth between the present and the separate plotlines of the past and I found this rather annoying. I found the ending something of anti-climax and for me the novel did not really fulfil its potential. It felt like an early draft that needed some reorganising.

I know there are others who have raved about this book, so don’t just take my word for it, but I’m afraid it fell short of Man Booker shortlist standard for me. And against my Days Without End yardstick (possibly the best book not to be shortlisted, ever!) I’m afraid it is inferior.

If you have read this book, what did you think? Is it just me???