With just a few days to go now until the announcement of this year’s Man Booker Prize winner, my goal to read all six titles by the 16th is not going well! In fact, it’s my worst performance in several years; I have only just started on my third title. Milkman took me some time to read. It is quite long, but it is also written in a way that I found it nearly impossible to read at my usual pace. The lyrical prose style that means you have to read nearly every word in order to feel the full impact. The same is true of the second book I read, The Long Take by Robin Robertson, which is in fact an extended poem, although it is somewhat shorter. I’m now on Everything Under, also quite short, but I’m not really enjoying it so finding it quite hard going. 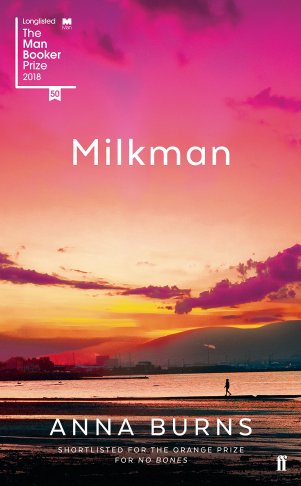 Milkman is set in Belfast during the Troubles in Northern Ireland and the central character and narrator is a young Catholic woman who finds herself drawn unwillingly into a relationship with a local paramilitary leader. It is not clear when the book is set, but I am guessing around the late 1970s, early ‘80s. Northern Ireland is known to be socially conservative, but the general sense of the place of women in society suggests to me that it dates back quite some time. Our central character (not named, I’ll come onto this) is from a large family. Her father is dead and she has several siblings, both older and younger. She is in a “maybe-relationship” with a local young man, who she has been seeing for about a year, though they have not made a commitment to one another. She is keen on running as a hobby and shares this with “third brother-in-law”. Whilst out running one day in a local park she finds that she is observed by a man in a white van. Over subsequent weeks he infiltrates her life by stealth, indicating that he expects her to have a relationship with him. He is known only as “Milkman”. It becomes clear to her that he is quite a powerful local figure in the paramilitary world, so not only does she have little choice about whether to become involved with him or not, it is made quite clear to her that as long as she goes along with him no harm will come to her “Maybe-boyfriend”.

The pace of the novel is slow as we follow her complex internal dialogue about what she should do, her fears, her accounts of how the community reacts to her activities and descriptions of what life is like in this environment of threat, surveillance, oppression and violence. At first I found this slow pace frustrating, especially as there were parts early on that I felt could have been edited down. However, by the end of the book I could see that the author was building her character’s world quite carefully. Some readers will no doubt be only too aware of what life was like at this time in Belfast, the segregation, the violence, the suspicion, but most of us will not, and the slow pace ultimately helped to draw me in and help me appreciate the character’s dilemma. The sense of how she had no choice, the sense of how any behaviour outside the accepted norms is considered beyond the pale. For example, our character has a habit of “Walking while reading”, which almost everyone around her considers unacceptable behaviour and comments upon and encourages her to stop doing. It is ironic that such innocuous behaviour is thought to be dangerous and provocative in a context where shooting, killing and blackmail are not.

None of the characters in the book are named, all are referred to by their relationship to the central character (eg Ma, wee sisters, first sister), or some other title. This is not as complicated as it sounds and I think the author is trying to make her characters representative of the lived experiences of so many ordinary people in Northern Ireland at that time. It is also indicative of the dehumanising effect of the Troubles, and in particular what our young woman went through. By removing any autonomy or choice from her (and it was not just Milkman doing this, it was the strictures of the community) there is a gradual destruction of her selfhood.

So, a long and complex read, but a brilliant novel from a very talented writer. The prose is sublime, the language is like nothing I’ve read before, except perhaps Lisa McInerney. It won’t appeal to those who like action and plot, but for an examination of the day to day life of a young person in Northern Ireland during that terrible period it is something quite special, and very enlightening. Recommended.

Have you managed to read any of the Man Booker shortlisted titles yet?