This has been on my TBR list for years – it was a sensation when it was first published in 2001, went on to win the Man Booker Prize in 2002 and was adapted for film in 2012, winning four Academy Awards, including Best Director for Ang Lee (though critical reception of the film was mixed). However, my life at that time was rather dominated by small children – these were what I call my ‘lean years’ of reading, of adult books anyway! I determined to read Life of Pi this summer because my elder daughter thought it was brilliant and has been harassing me to read it for months. I will put my cards on the table straight away – I thought it was extraordinary. The best thing I have read since The Overstory by Richard Powers, which I finished in January. 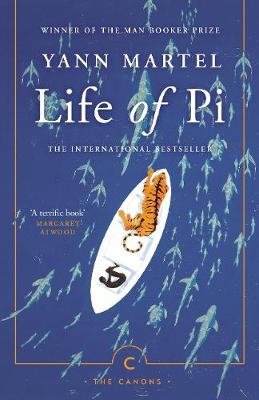 The story is well-known: a young Indian boy, Piscine “Pi” Patel (a name he adopts to get back at the school bullies who taunt him with the nickname ‘Pissing’) grows up in the territory of Pondicherry where his parents own a zoo. The first part of the story gives us a detailed account of the family’s life there, including enormous detail about life for the animals in a zoo setting (I was fascinated by this and it changed my perspective on zoos). We learn in particular about the fierce Bengal tiger, Richard Parker, who is the zoo’s prized possession. I love the use of ‘naming’ in this book – the story of how Richard Parker came to be given this name is brilliant and a sign of the author’s ingenuity and creativity. The other important feature of this part of the novel is that we learn of Pi’s deeply philosophical nature, his decision to adopt three religions (Hinduism, in which he has been brought up, Islam and Christianity), much to his family’s dismay, because he can see benefits in all of them.

Difficult political events in India lead his parents to make a decision to move to Canada, taking their most precious animals with them, in order that they can start a new zoo. Shortly after leaving port, however, the Japanese freighter in which the family is travelling sinks. All souls are lost, except Pi, who escapes in a lifeboat, with, as he will soon discover, four animals – a hyena, a zebra, an orangutan, and Richard Parker, the Bengal tiger. The first part of the journey is gruesome and terrible; the zebra has broken its leg in the fall and is soon brutally and graphically finished off by the ravenous hyena. The hyena then attacks, kills and eats the orangutan. This is not for the squeamish! Pi believes he is going to be next on the hyena’s list until he discovers they are sharing the lifeboat with the tiger, who has been hiding under a tarpaulin for days, suffering with severe seasickness! When he does emerge, the hyena is no match for Richard Parker, who summarily kills him. This undoubtedly saves Pi’s life but it is out of the frying pan and into the fire as he wonders if he will be Richard Parker’s next meal.

What we are treated to next is many months of a precarious symbiotic existence on the lifeboat – boy and tiger trying to survive. It is a quite extraordinary feat that the author can make 227 days on a lifeboat in the middle of the ocean such edge of the seat reading. First we have Pi’s incredible ingenuity, the powerful survival instinct which enables him to stretch the meagre rations in the lifeboat’s emergency pack, and utilise all the supplies available. Second, there is the way he manages Richard Parker to ensure that he, Pi, becomes the alpha animal – he uses all his zoo knowledge, plus his exceptional courage, to teach the tiger submissiveness and this enables them both to survive. Third, there is the incredible storytelling, the highs and lows of shipwreck (at one point they land on a lush island, only to discover that it is dominated by deadly carnivorous plants) plus Pi’s account of his own mental health.

We know that Pi will survive – the novel begins with the author meeting the older Pi in Canada, and Pi promising to tell him his story – but this makes the account no less tense, so close to peril do the pair exist. There is a brilliant twist at the end, which I will not disclose, but it kind of leaves you breathless. Untethered!

I found this a profoundly fascinating book that you can read on so many levels. It is a philosophical tract about the nature of the divine. It is a book about the triumph of the human spirit when faced with adversity. It is a book about the relationship between man and beast. It is also, quite simply, a brilliant yarn about that most traditional of stories, the shipwreck and the survivor.

Absolutely brilliant, loved every second of it, highly recommend it, can’t believe it took me so long to get around to it!

I’d love to hear about a book on your TBR list that you loved once you finally got around to reading it.