I listened to this on Audiobook, which was narrated by the wonderful Aidan Kelly. It’s a brilliant book, with the most sublime use of language, my appreciation of which was enhanced by Kelly’s fabulous reading. I had the same experience with Holding by Graham Norton, but sadly not with The Girl on the Train by Paula Hawkins, which I’m listening to at the moment, where I’m finding the narration rather irritating. Aidan Kelly’s reading brings such an authenticity to the listening experience that I actually believed I was listening to Thomas McNulty. 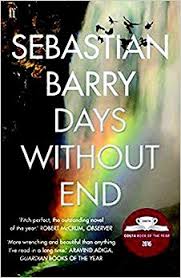 The book is set in America in the 1850s, where our very young narrator and central character, Thomas McNulty, finds himself after fleeing devastating famine in Sligo, Ireland, and searching for a new life, any life, in the New World. He signs up as a mercenary soldier for the Government infantry in the civil war against the Confederate south. There he meets ‘handsome John Cole’, an American, with whom he develops an intimate relationship. When their time in the infantry ends the two make a living for a while as entertainers where Thomas masquerades as a woman. He finds he is comfortable playing this role with John Cole as his beau, and in the periods when the two live a settled life together, it becomes his costume of choice, as well as providing a convenient disguise in times of trouble.

The accounts of war and violence are graphic and horrific and no detail is spared, which I found difficult to listen to at times, although also strangely compelling. Thomas and John rejoin the army further on in the novel and are involved in head to head battles with native American Indians. These accounts were even more harrowing as the contrast between the two sides is exposed so starkly, the soldiers having far superior firepower. In one of these encounters, Thomas and John rescue a young girl, Winona, whom they practically adopt as their own daughter and determine to look after.

Some of the scenes in the book are brutal and hard to read (or in my case listen to). The injustice of the men’s situation, the terrible conditions in which they have to live, the way that soldiers are treated as cannon fodder and afforded very little respect by their military masters is shocking. They are forced to live a most brutal existence and for many of the men the experience is completely dehumanising. The extreme violence they both administer and experience is like nothing that most of us will ever have come across and the novel is very powerful as a result. And yet, there is also tremendous tenderness: the relationship between Thomas and John Cole is beautifully drawn, though we never hear John’s voice first hand, and never gratuitous, never titillating. Even Thomas’s cross-dressing is handled with a beautiful innocence. The love that is shared between the two young men and Winona is also very powerful; that they are capable of such care of another human being is all the more moving when you consider the extremes of violence, deprivation and injustice in which they have existed.

There is a tale here, though mostly the novel is about a time and place in history and what that was like for the people immersed in it. It is a tale not just of survival but about how people who have nothing, have love and find a way, ultimately, to live peacefully.

This is one of a series of novels about various members of the McNulty family. I haven’t read the others, but I will certainly do so after reading Days Without End. The novel won the Costa Book Award in 2016 and has been widely acclaimed.

I recommend it highly and can particularly recommend the audiobook. That said, the language of the book is so beautiful that I would also love now to go back and read it, to see those words dance on the page.

If you have enjoyed this post, it would be great if you could follow my blog by clicking the subscribe button below or to the right, depending on your device.

6 thoughts on “Book review: “Days Without End” by Sebastian Barry”