It has been half term in our household this week. My husband took our daughters off to visit family so I decided that I would take a trip with our eldest, to spend some quality mother and son time together. He will be taking his Spanish A level this summer so I thought it would be good to try and get him to Spain for a bit of speaking practice. I booked the flights three months ago and chose Madrid mainly because we got a fantastic price and the flight times were great. To be honest, though, I was open to going anywhere in Spain; I have been to Barcelona, San Sebastian and the Southern tip around Jerez and Tarifa, and have enjoyed my trips there very much. 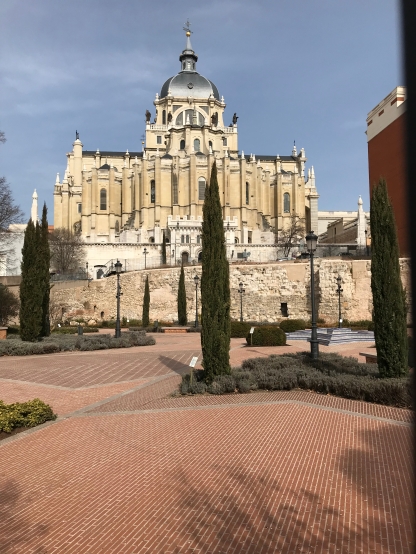 Madrid, where both the grand architecture and the narrow streets bring equal pleasures.

Madrid is one of the must-see European cities. There are not too many major ‘sights’ to see, so it is not overwhelming in the same way that, say London or Paris can be (visitors to London: where do you start?), and they are mostly within a compact city centre area. You can take some great trips out of the city, for example to Toledo and Segovia, both within an hour or so, but we decided that remaining central would best suit our purpose. It is a city for walking, eating and art. We took a relaxed approach to sightseeing, soaked up the atmosphere and enjoyed it immensely. 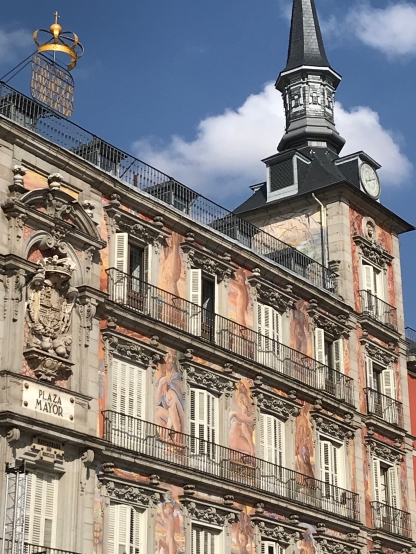 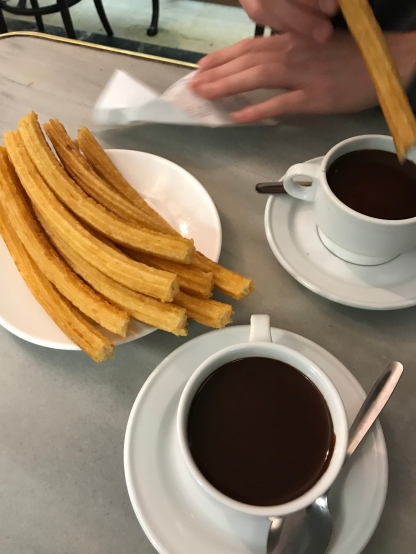 Our companion was the Lonely Planet guide to Madrid (I find these are consistently the best travel books). On the first day we followed the suggested walking tour of old Madrid, taking in, amongst other things, the Palacio Real, the cathedral, the Plaza Mayor and, very importantly, the iconic Chocolateria De San Gines, for the ubiquitous churros and hot chocolate (take a bottle of water with you, it is very rich!)

On the second day we walked round the wonderful Parque del Buen Retiro, the huge park to the east of the city centre, with its wonderful gardens, footpath, boating lake… and more churros! Madrid’s oldest tree, a Mexican conifer planted in 1633 and with a 52m trunk circumference, stands impressively opposite the Puerte Felipe IV entrance. Near the border of the park is the stunning Museo del Prado, which we went to in the afternoon. Most galleries of this stature need two or three visits to even begin to appreciate the collection, but if you are on a short visit it is worth just taking in the highlights, and the museum provides a handy leaflet with all of these listed. Our guidebook recommended going soon after opening to avoid the queues, but we went around lunchtime and there was no queue at all. The cafe in the museum was over-priced and not particularly good. 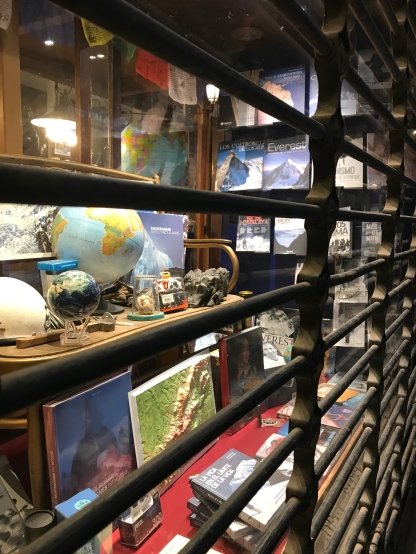 On the third day we went to the far west of the city centre to the Parque del Oeste. We planned to go on the Teleferico, a 2.5km cable car that travels over the vast green Casa de Campo, but sadly it was closed for maintenance (an issue with low season). We went to the tiny church of Ermita de San Antonio de la Florida (above) where there are some incredible Goya frescos, and the ancient Templo de Debod, a gift from President Nasser of Egypt, dismantled and transported brick by brick in 1968 (sadly, also closed). We walked back along Gran Via and browsed the shops. I always like to get the measure of a place by checking out its bookshops and Madrid has some fantastic ones, with plenty of foreign language books. There was even a bookshop devoted entirely to mountains (Libreria de Montana, above) in the Huertas district!

On our final day we had plenty of time before our late afternoon flight to take in the modern art gallery of Centro de Arte Reina Sofia, not far from where we were staying. I was particularly keen to see Picasso’s Guernica, a painting I have long admired. It is truly stunning and I am thrilled to have been able to see it in the flesh, as it were. It is surely one of the finest anti-war artworks ever, and, 80 years after it was created, is as relevant as ever. It was worth the €10 entrance fee on its own just to see this, but there are many other stunning works of art to take in, including films explaining the context and history, and the main highlights are all on the second floor, again, useful if you have limited time.

My son and I are both fairly frugal by nature so I was keen to try and do the trip on a budget. We stayed in a little apartment in the Lavapies district, which was quiet and is great value. You can eat fairly cheaply, because there is so much choice and the quality is reliably good (definitely unlike London!). We spent €50-60 a day on lunches and dinners, including a glass of wine with meals. I bought a 10-journey Metro ticket, but we didn’t use it all up as we were able to walk nearly everywhere. That would no doubt have been less comfortable in the summer. February was a great time of year to go and I would definitely recommend it – the weather was mild and sunny and it wasn’t too crowded. We went to the cinema a couple of times, and I was pleasantly surprised to find tickets were only €5-6 each – that’s even cheaper than my little local cinema! My son found this very useful for his Spanish.

Madrid is a fabulous city, the people are warm and friendly, the food is incredible, it’s great value and I recommend it highly. We are completely churro-ed out though!

Have you been to Madrid – what were your highlights?

If you have enjoyed this post, I would love for you to follow my blog. You can also connect with me on social media using the buttons above.