This was the February choice for my Facebook Reading Challenge, the theme of which was a non-fiction book. I’d had some excellent suggestions from others, but when I walked into the bookshop, this slim little volume with the beautifully coloured bird on the front, jumped off the shelf at me. It was only on closer inspection of the cover that I noticed the barbed wire and the unmistakable image of a watch tower in misty monochrome. This book is written by a Holocaust survivor, a former inmate of Auschwitz, the notorious Nazi concentration camp where over a million Jews were murdered; the seventy-fifth anniversary of the liberation of Auschwitz was commemorated at the end of January. 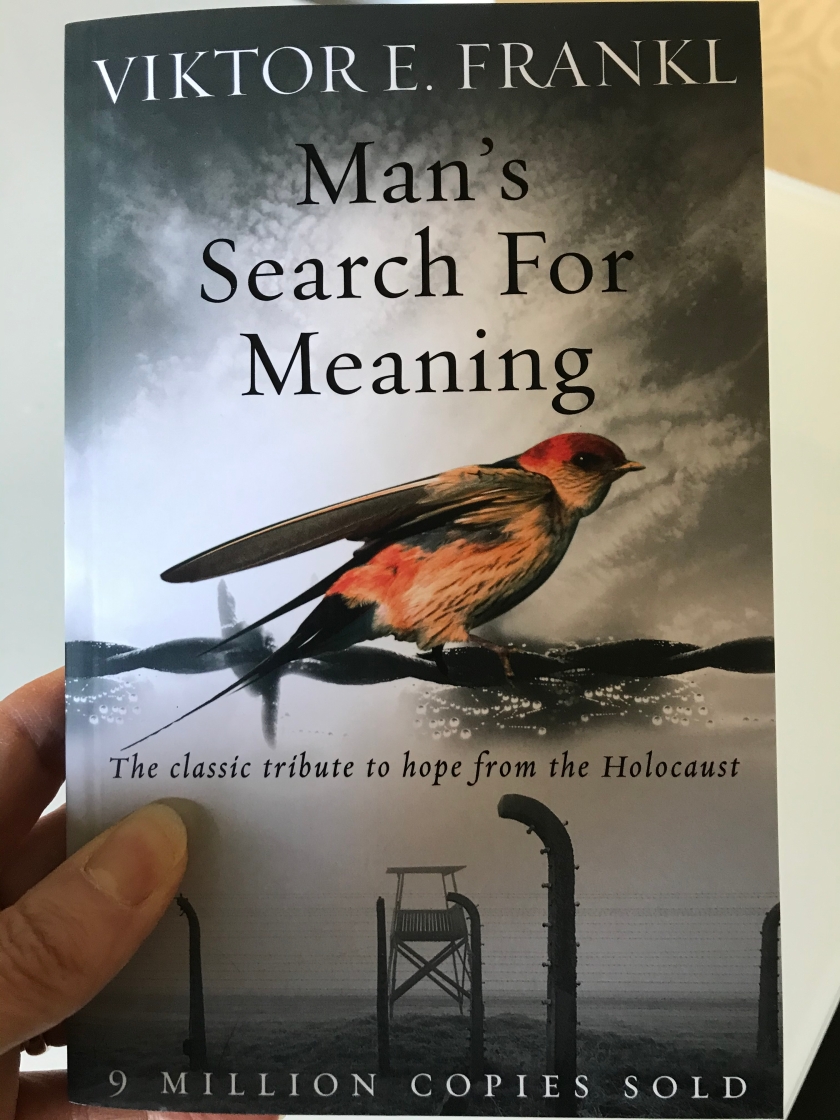 Viktor E Frankl was a psychiatrist who is credited with developing one of the most important theories in the field human psychology (logotherapy) since Freud. He was developing his theory before he was captured by the Nazis but his time in the concentration camp enabled him to observe human beings in extreme conditions and further evolve his ideas.

The core idea of logotherapy (if I understand it correctly) is that human beings have a ‘will to meaning’ and that is what enables them to survive even the most shocking brutality. To illustrate his point, Frankl writes in the first part of the book (about two thirds of the total) about his day to day experiences in the camp. We all know how terrible, degrading and dehumanising these were, but I certainly never fail to be shocked when I see or hear of them. Frankl suffered terribly, but he was also fortunate, as a doctor, to be called upon to look after sick inmates, and this enabled him to observe others at their most vulnerable.

It often occurs to me that it was a particular torture to keep those rounded up into the camps alive when the ultimate goal was extermination. Prisoners were used as slave labour and Frankl describes the horrific conditions they were expected to work in, digging up frozen ground in sub-zero temperatures wearing only the standard issue striped pyjamas, shoes which injured their feet, and surviving on a thin broth that was barely more than hot water. Frankl writes that horror was so commonplace and exhaustion so total that people became inured to feelings – being insensible was a necessary protection. Some inmates effectively ‘colluded’ with their captors and became mini foremen, acting as wickedly as the Nazi guards at times, but Frankl is philosophical:

“No man should judge unless he asks himself in absolute honesty whether in a similar situation he might not have done the same.”

In the face of absolute degradation, where the prisoner’s life had no value, stripped of all freedoms and autonomy, Frankl observes that the only thing left is ‘spiritual freedom’ – the ability to choose one’s attitude in a situation. And this fragment, he believes, is enough to give one hope and purpose. He also observed that once this is lost, when a person can no longer see a goal or meaning, their physical life ebbs away.

Very few of us will ever have an experience like that of Dr Frankl or the six million Jews murdered in the Holocaust, though a few experience extreme privation, imprisonment and torture. Dr Frankl carried his theories into his work with normal people experiencing difficult things in their life. He cites an example of a bereaved colleague, devastated after the death of his wife, who felt that there was no longer any purpose to his life. Only once Dr Frankl was able to show him that his loss meant his wife had been spared the grief of being widowed, was he able to find meaning in his life again and thus move beyond his grief. Frankl is clear though that suffering is not necessary in order to find meaning in life, rather, that even through suffering, meaning can be found.

According to logotherapy we can find meaning in three different ways: by creating a work or doing a deed; by experiencing something or someone; and by the attitude we take to unavoidable suffering. Even when we are no longer able to change a situation, we are able to change ourselves. This for me, was the strongest message that came out of the book – Dr Frankl’s account of his time in the camp is both harrowing and compelling, but he is nonetheless able to draw from it, wisdom that is relevant to us all.

Viktor Frankl died in 1997. The second part of the book was revised and updated in 1962. I was struck by his reference to what he calls the ‘existential vacuum’, the depression people experience when they seem to lose the meaning in their life. He writes of how increasing automation in the workplace could lead to such a state. Retired an ageing people, he writes, can easily be afflicted by this as their once busy lives become seemingly empty. Here in the 21st century many of us have more leisure time than ever, but many of us don’t know what to do with it and may in fact be lonelier and less fulfilled than ever. Perhaps this explains the ‘Blitz spirit’ that older British people often reminisce about – in the suffering they found community and meaning and purpose. Perhaps it also explains the mental ill-health epidemic that seems to be affecting developed nations all over the world.

All of the above may be total gobbledygook, the ramblings of a middle-aged woman trying to work out her own purpose! I hope what will have come across to you, however, is that this is a very powerful book, that we should all read and which, I guarantee, will give you much food for thought.

Regular readers of this blog will know that I have an annual Facebook Reading Challenge, a little group where I try to push my reading boundaries. Each month I have a different theme; last month, in the spirit of the new decade, the theme was one of the biggest books from the last decade. I chose Gillian Flynn’s Gone Girl – I’ll be posting about THAT in the next couple of days. Phew! What a page-turner!

This month the theme is non-fiction and I was planning to take up a suggestion from a fellow Group member, when I happened to be in the bookshop and this title jumped off the shelf at me – Man’s Search for Meaning by Viktor E Frankl. It is described on the blurb as one of the classics to emerge from the Holocaust, a tribute to the triumph of hope. If, like me, you were deeply moved by the speeches delivered by Holocaust survivors at the 75th anniversary commemoration of the liberation of Auschwitz last week, this does seem like a fitting time to read such a book.

And at the moment I feel I need some encouragement that hope triumphs, given the problems we are all facing. I’m afraid the departure of the UK from the European Union, and in particular the division it has wrought upon this nation, troubles me. There does not seem to be anyone on the planet at the moment capable of leading the world out of the climate crisis, except Sir David Attenborough, and he is 93 years old. As for politics, well across the world the post-truth era seems to have well and truly embedded itself.

So, I’m hoping that Dr Frankl will help me to see the bigger picture and give me some hope back!