This was one of my holidays reads and one of two books my book club chose for our summer break. It’s only my third Tracy Chevalier novel, but each time I read her I just want more! I read Girl with a Pearl Earring years ago when it was first published and then The Lady and the Unicorn a year or so ago, which I thought was wonderful. I have since picked up Virgin Blue from my local secondhand bookshop so that will be next on my list.

One thing that is so impressive about Chevalier is how beautifully she creates the  historical setting: the two novels I have read so far have been set in 17th century Holland and 15th century Paris and Brussels and I can only begin to imagine the amount of research she has to undertake. The Last Runaway is set in the United States in the mid-nineteenth century when parts of the country were only just being settled. Honor Bright, our main character is a young Quaker woman from Dorset in England. She has led a modest and sheltered life, but her world was turned upside down when her fiancé left her and their close-knit Quaker community for another woman. This was not only a scandal but it left Honor distraught and in a very difficult position. When her sister, Grace, is persuaded by her fiancé that they should move to America, Honor decides she must go with her, not only to support her sister, but to escape the oppression of her situation and have some chance of making a life for herself.

Their journey from Bristol to New York is arduous and Honor suffers with debilitating seasickness. As they travel the long distance from New York to Ohio, Grace contracts Yellow Fever and dies. This places Honor in a further difficult position: not only must she tell Adam Cox, Grace’s fiancé, that she is dead, but she is also in fear about where that leaves her as he, of course, has no obligation to support her. Honor, however, cannot face going back to England either because of the journey or the shame.

On the final leg of her journey, Honor has a frightening encounter with a local slave-hunter, Donovan. Honor is appalled both by his profession and his dangerous air, and yet also finds herself strangely drawn to him when he seems to flirt with her. This also sends her into a tailspin as it conflicts with her Quaker outlook and moral code.

Honor arrives in the small town of Wellington, close to Faithwell, her intended destination. There, she finds quarters with Belle Mills, the local milliner, who, it transpires, is also the half-sister of the mysterious Donovan. Belle warns Honor about him and it is clear there is a tension between these siblings. During her stay with Belle, Honor adapts her talent for quilting (quilting, its traditions, the patterns and its place in Quaker culture, are a strong and fascinating motif running through the novel) and shows promise as a hat-maker, endearing her to Belle and her many customers. Belle’s designs are often flamboyant, which is an anathema to Honor, who, as a Quaker, must observe plainness and modesty in all forms of dress. The two women develop a firm friendship, however, and Honor begins to feel more confident.

Honor first realises there is something strange going on when she finds a black man under a woodpile in the yard of Belle’s home. Honor is aware of the existence of the slave trade, indeed, the Quakers were an important part of the movement calling for its abolition, but this is the first time she has come so close to an escapee. She is terrified, particularly when Donovan comes searching at his sister’s property, sensing the presence of the runaway. Honor later learns that Belle is part of a network of citizens who provided the means of escape, food and shelter for runaway slaves fleeing the South to states which had already outlawed slavery – the ‘underground railroad’. Belle was what was known as a ‘station-master’.

Honor is collected from Belle’s by Adam Cox, Grace’s fiancé, and taken back to Faithwell, to live with him and his sister-in-law (also widowed) and to work in their shop. The domestic situation is uncomfortable for Honor, however, and her prospects only  brighten when she is wooed and then married to fellow Quaker Jack Haymaker. At first it seems like a good marriage that will improve Honor’s situation, but her mother-in-law proves to be a formidable presence, who does not conceal her contempt for her daughter-in-law and how little she has to offer when Honor goes to live with them on their isolated farm. At first, Jack is attentive and loving, but quickly becomes complacent and Honor grows increasingly miserable, despite her efforts to feel and appropriate degree of godly gratitude. Tensions deepen when Honor decides she will provide support for runaway slaves passing through their property. This is against the expressed wishes of the Haymakers. A law has been passed which makes it illegal for anyone to help a runaway, and the penalties are severe. Whilst the Quakers are against slavery, they are also against law-breaking and Honor’s actions are seen as a threat to their livelihood. Honor finds herself increasingly in conflict with the family until the point where her position becomes untenable. All the while, Donovan hovers in the background, stalking Honor and sniffing out runaways.

I will say no more as the events of the story then take quite dramatic turns. I loved the unexpected twists of the plot. I also love the way the author wove in details about the slave trade and the underground railroad (which I confess I knew very little about). Colson Whitehead’s 2016 novel The Underground Railroad brought the existence of this movement to the attention of many readers for the first time, I think. I was not aware that Tracy Chevalier had also written this novel about it. I also loved the domesticity of this novel, its femaleness and the feminine craft of homemaking, particularly in relation to the skills required for good quilting. This seems to be a common theme in Chevalier’s work. I loved how strong the women were in this novel; the men do not come out looking so good!

I recommend this book highly. It’s a great story, a fascinating read and will give you an insight into worlds you may not know much about.

If you have read this book, I would love to hear your views.

Although it’s been a wonderful summer, it feels, as always, good to get back to my desk, to my computer and to my blog. I’ve had nearly 3 weeks ‘off’ – I use that term more because it is a general expression, not because I see it as any kind of chore. In truth, I have missed my blog! The reason I have posted so rarely is because I was a) doing so much reading, b) got totally sidetracked by a nearly impossible jigsaw puzzle at our holiday home (!), and c) was just having a great time with the family. When I wasn’t reading we were cooking, eating, talking, staring at the stars, a sight we are not so used to in our light-polluted Greater Manchester suburb, getting out and about, all the things you do on holiday, really. It’s been a fantastic break for all of us and we have all come back newly energised to face into the new academic year (it’s another big one for our family), ready to meet new challenges and set new goals. 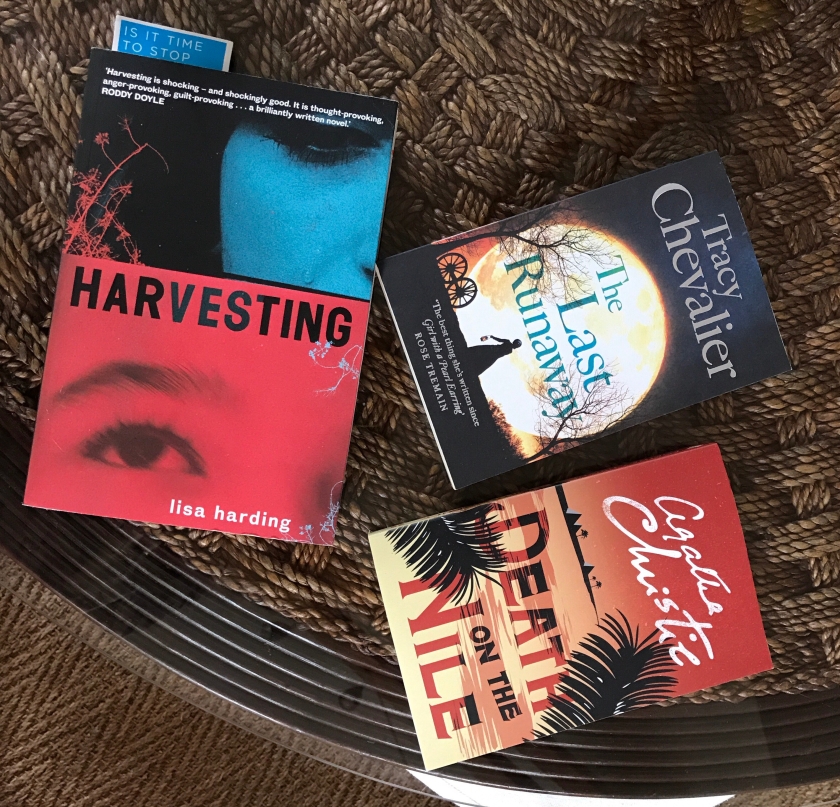 I managed to read all three of the books I took on holiday with me, and enjoyed all of them immensely. They were Harvesting by Lisa Harding, Death on the Nile by Agatha Christie, the August choice for my Facebook Reading Challenge, and The Last Runaway by Tracy Chevalier. I’ll be posting reviews of them over the next few weeks.

So before I launch into the ‘new year’ (I’ve posted here before that I find September a more effective time to start things than January), I would like to close off the summer with some pictures of beautiful Brittany. We stayed in Cancale, well-known for its oysters, something I eat maybe once every couple of years – twice in a fortnight is enough!

We were staying in Cancale, famous for its oysters…

…an impromptu oyster picnic beside the beach!

I loved Mont-St Michel, over the border in Normandy. It was absolutely thronged, but we arrived early afternoon and by 5pm the crowds had thinned significantly. 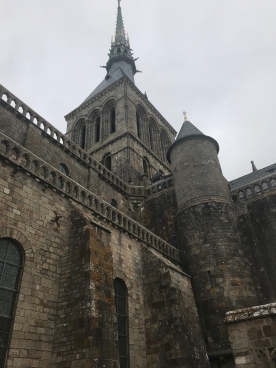 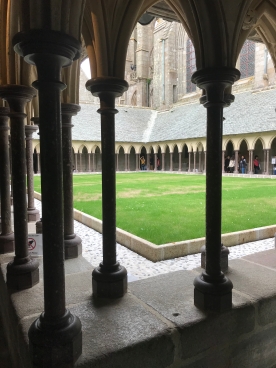 We visited beautiful Dinan, ‘town of history and art’, a couple of times and I loved it. One tip if you go there – don’t expect to be able to get lunch after 2pm! 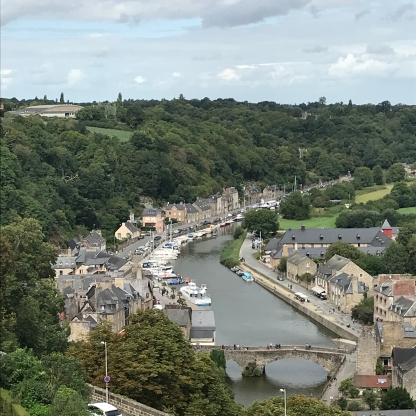 Another favourite was Ile-de-Brehat, a wonderful island, just off the coast near Paimpoul. It’s tiny, rugged, and there are no cars. You can hike from one end to the other, or as we chose to do, cycle all the way round. 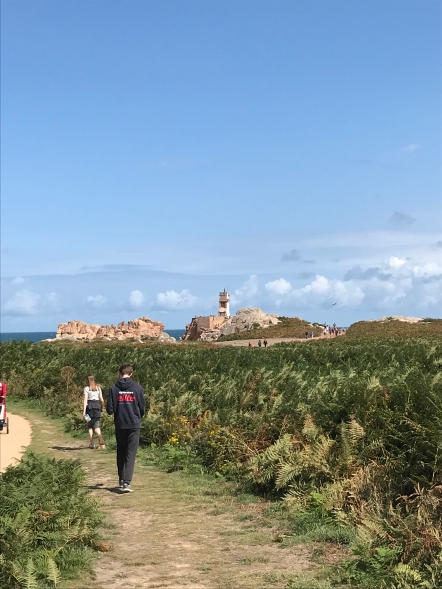 Finally, from my holiday photo album, recognise this?

I was delighted to be able to visit St Malo, setting of Anthony Doerr’s wonderful novel All the Light You Cannot See, a truly beautiful town.

Have you ever visited Brittany or been to any of these wonderful places?